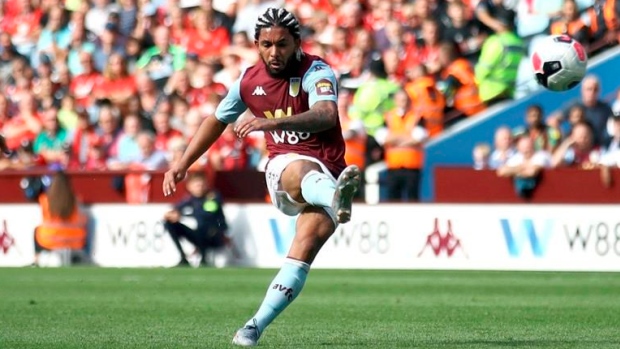 BIRMINGHAM, England — Promoted Aston Villa couldn't overcome a woeful start as it lost its first home game in the English Premier League to Bournemouth 2-1 on Saturday.

Villa's fightback saw it reduce the deficit in the 71st through a fine Luiz finish, but it was unable to prevent a second defeat in its first two matches. It lost at Tottenham 3-1 in the opener.

Bournemouth, meanwhile, celebrated its first win of the season, having drawn with Sheffield United 1-1 last week.

There was considerable noise around Villa Park from home fans before the ground staged its first Premier League match since May 2016.

But that soon changed as the hosts were twice made to pay for misjudgments twice in the first dozen minutes.

First, Heaton, one of Villa's raft of summer signings, brought down Callum Wilson in the box inside the opening minute. Referee Martin Atkinson pointed to the spot and King struck the penalty confidently into the corner.

Then, Luiz, the summer signing from Manchester City making his first Villa start, got things wrong as he let a pass run through his legs. The loose ball was claimed by Harry Wilson and the winger, who is on loan from Liverpool, sent a shot in from outside the box via a deflection off ex-Cherries man Tyrone Mings and the post.