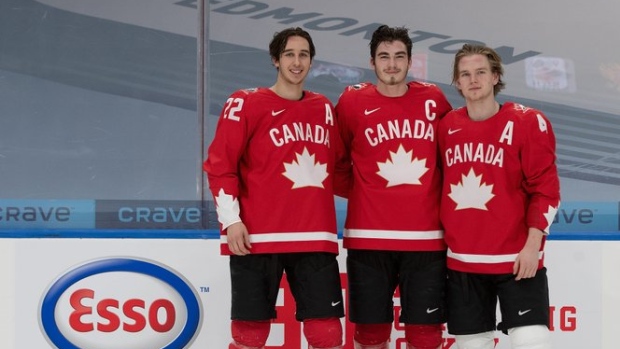 Team Canada held its first practice inside the Edmonton bubble on Friday.

At the end of Friday's practice, their first inside the Edmonton bubble, Team Canada gathered at one end of the ice and players were told to look up for a special message. Moments later, Oilers captain Connor McDavid, who won a gold medal at the 2015 World Juniors in Toronto, appeared on the video board. ​

"There's nothing more special than winning a gold medal on Canadian soil so hopefully you can defend it and do Edmonton and do Canada proud," McDavid told the group.

He then proceeded to announce the team's leadership group. Lethbridge centre Dylan Cozens and Vancouver defenceman Bowen Byram, both returning players, will be alternates while forward Kirby Dach, on loan from the Chicago Blackhawks, will be captain. It was only a few months ago that Dach helped the Blackhawks eliminate McDavid's Oilers inside the Edmonton bubble. McDavid noted that Dach is "going to be a special player."

"He touched on it there that we battled it out in the playoffs and it was fun series," Dach said. "It was a coming-out party for me and I had fun playing there and hopefully I can continue that individual success and bring it to the team and have a good tournament here."

After Dach produced six points in nine playoff games while logging big minutes, it seemed unlikely that he'd be available to Hockey Canada for the World Juniors. But after plans to hold the event were confirmed, Dach reached out to the Blackhawks through his agent, and let them know this is an opportunity he craved.

"His willingness, his desire to represent his country, you could feel it right from the beginning," observed Team Canada head coach Andre Tourigny. "The way he carries himself during games, the way he prepares, the way he pays attention to detail in practice and games, he really showed a lot of maturity, a lot of leadership."

Tourigny said the decision on the captaincy was obvious to everyone they consulted so the staff figured there was no reason to hold off on making it official.

"Kirby playing in the NHL last year, it’s pretty cool for us to have him," said Byram, "awesome of him to want to be here and participate with us."

That professional experience should serve Canada well. Dach learned a lot from watching Chicago's core four up close. He lived with Brent Seabrook and his family during the season. He marvelled at the work ethic of Patrick Kane and the elaborate home gym of Duncan Keith. And he got to see what makes Jonathan Toews a good leader.

"He just seems to have that knack for saying things when they need to be said and how to say it and how to get through to everybody," Dach told TSN before Canada opened camp.

On Friday, Dach said he's still getting a sense for that part of leadership.

"I'm still trying to learn that as I go along," he noted. "I think that just comes with experience and being comfortable with a situation. I'm comfortable here and there's a lot of good guys in the locker room."

In Byram and Cozens, Dach has two lieutenants who have first-hand knowledge of how unpredictable this event can be.

"It's crazy," Byram said of getting to wear a letter. "Growing up and watching the tournament you always looked up to the leaders on the team and now to be one of those guys is something I'll remember forever. Our job's not done though (laugh). There's a lot of things to do. I mean, we got to win a gold medal."

"I'm a guy that everyone feels comfortable with and can come up and talk to," said Cozens. "I want to be a guy who's there for everyone."

"It was kind of a three-headed monster since the beginning in terms of leadership," said Tourigny. "They were all in."

Both Byram and Cozens played key roles during the gold-medal run in Ostrava last year. During that tournament, Canada dealt with a series of setbacks. Eventual MVP Alexis Lafreniere was injured during a blowout loss to Russia, the most lopsided in Canada's history at the event. Afterwards, captain Barrett Hayton didn't take his helmet off during the Russian anthem creating a controversy that spilled into the off day. Centre Joe Veleno was suspended one game for head-butting a Russian player.

Canada recovered to win the next five games, including coming back from down 3-1 in the third period against Russia in the gold-medal game.

"We know it's not going to be easy," said Cozens. "We know how hard it is to win this tournament. That's some experience I bring from last year. The biggest thing for us is staying humble."

The players are well aware of all the buzz surrounding this incredibly deep Canadian roster, which boasts 20 first-round picks.

"There's a lot of talk about us, all the first round picks and what not, but the biggest thing for our group is everyone buying into their roles," said Byram. "It's a huge thing in a short-term event."

While Dach is admittedly more on the reserved side, Byram isn't afraid to speak up.

"I'm a vocal guy," he said. "I try to bring a lot of energy and that's my leadership style. I try to make sure everyone's included and feeling part of things."

Tourigny credited Byram for showing urgency during Friday's practice when the power play wasn't connecting during the special teams work.

"You could see how much he cared," the coach noted.

Most of Team Germany will need to remain in quarantine until Dec. 24 after eight players tested positive for COVID-19.

"It was shocking for us," said head coach Tobias Abstreiter. "We have to make the best out of this situation.”

The event's medical team, a five-member panel of Canadian and international experts, reviewed each positive test on an individual basis before making a decision on how to act in consultation with Alberta Health Services.

"For sure very tough news," said German forward Tim Stuetzle. "Everybody was thinking everything was good. We had a lot of testing at our training camp and we tested every day and nobody was positive and so yeah, for sure, it was kind crazy when we got the news."

A handful of German players who previously tested positive will be able to skate, but most of the team remains confined to their rooms inside the JW Marriott where they have been since arriving​ Sunday night.

"It's a dream for the guys to play in Canada in a World Championship here in Edmonton and in a nice building," said Abstreiter. "We will push each other and give each other trust and confidence and work on our identity. I think the guys are very positive and once we come out we want to push the stamp from Team Germany on this tournament."

Ottawa's third overall pick in October's draft, Stutzle is eager to get back into game action regardless of the circumstances. He's been sidelined since breaking his left hand in October.

Germany is facing a tough schedule with Finland on Christmas Day and Canada on Boxing Day and now only one full practice day to prepare.

Most of Team Sweden will also remain in quarantine until Monday after two staff members tested positive for COVID-19. Only seven players were on the ice on Friday night with team doctor Ryan Allenby overseeing the workout.

"It's my coaching debut," he said with a laugh. "These boys, they're well versed in their craft and they could run it just as easily without me so I'm just there to help out where I can. Myself and the seven players all had a COVID infection within the last 90 days so we're exempt from testing and that's why we were released today."

This is the latest setback for the Swedes who already lost four players and head coach Tomas Monten due to positive tests during training camp.

"It's a tough run, but the boys talked about it before we came here and even though we're short staffed we wanted to go and fight for a gold medal," said Allenby. "So, yeah, it's rough but the guys will be ready when they get out of their rooms."

"I was probably a better student than an ice hockey player," he said with a chuckle. "My wife is Norwegian so we lived in Norway, but we moved for our jobs. The hockey, of course, was better in Sweden so it was an easy choice for me. It was always my dream as a doctor to work in hockey so it's fantastic to be at the World Juniors."

Igor Larionov isn't wasting any time putting his imprint on Team Russia in his first year as head coach of the national junior team. The Hockey Hall of Famer, who is taking over for Valeri Bragin, wants his young charges to learn from his past.

"It's kind of showing my experience and my knowledge and how to play the game I want them to play and try to help the young guys to see the game different than they're used to seeing it," Larionov explained. "I'm happy to see some good signs of listening to how we played back in the day and also in Detroit with the Russian Five."

Sergei Fedorov, Vladimir Konstantinov, Slava Kozlov, Slava Fetisov and Larionov helped the Red Wings rack up wins in the 1990s while controlling possession and moving the puck with lightning-fast efficiency.

"We're going back to the basics," Larionov said. "First of all, it's the game of hockey so it should be fun. It should be entertaining. So, to me, it's maybe a bigger task to get the boys to understand, like, move the puck and play good, attractive hockey and to express yourself. The boys started to realize it's sometimes much easier and you spend less energy when you're moving the puck fast and you're creating some chances and read and react in any situation. It's the best way to play the game."

Seventeen of Russia's players have suited up in the KHL this season, but that isn't always great for their confidence.

"They are very strict by the system and by the coaches," Larionov noted. "The coaches, obviously, they're under the pressure and not letting the boys go through mistakes and when they come to my hands and the World Junior team I kind of let the boys be the boys and play the game, create some chances and do some stuff like they were doing as kids."

Salavat Yulaev Ufa winger Rodion Amirov, who has eight points in 23 games this season, is one of the players that Larionov has been coaxing creativity from.

"He's got a lot of skill and this kid needs some confidence to play hockey so that's one of the biggest tasks for me when I'm getting the boys from the KHL teams."

"So, now it looks like he comes into this tournament with a good confidence and good skill and he's going to play with good teammates too," Larionov said.

Amirov, a Maple Leafs first round pick in October, is currently on a line with Marat Khusnutdinov and Vasily Podkolzin, who is entering his third World Juniors.

Podkolzin, a Vancouver Canucks prospect, has six points in 24 games with St. Petersburg this season.

"There's no doubt in my mind he's a team leader and he's a guy who can handle the pressure, who can do a lot good, little things for the team and his skill level is top notch," Larionov said. "Sometimes he's doing a bit too much, but now with a good centre I think he's going to do his job more efficiently and effectively."