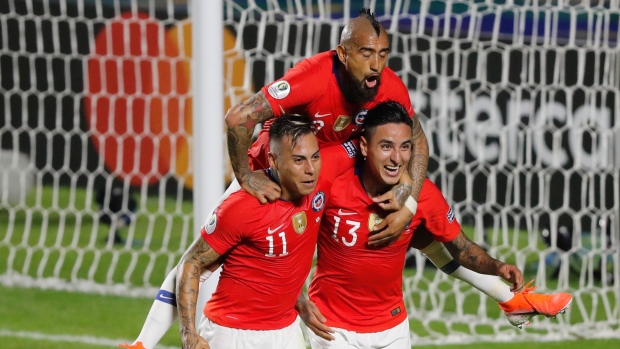 In the first round of matches, the continent's top powerhouses showed signs of weakness, prompting early doubts about their title chances.

Brazil was booed by its own fans after a slow start in the 3-0 win against Bolivia, while Lionel Messi's Argentina was dominated in a 2-0 loss to Colombia.

Uruguay and Chile, meanwhile, comfortably won their matches 4-0, over Ecuador and Japan, respectively.

Here's a look at how the top teams fared in their opening games in the Copa America in Brazil.

With Edinson Cavani and Luis Suarez in form, Uruguay routed Ecuador in Belo Horizonte on Sunday.

The first goal, by Nicolas Lodeiro, was one of the best of the tournament, with the midfielder controlling a pass from Suarez with his thigh before lobbing the ball over a defender and firing a shot into the net.

The second, by Cavani, was also a beauty. The Paris Saint-Germain forward scored with an acrobatic volley from near the penalty spot after meeting a delivery into the area. Suarez later added the third goal before halftime, and the fourth was an own goal in the second half.

Uruguay played well from the start at the Mineirao Stadium, though it was at a greater advantage after Ecuadorean Jose Quintero was sent off in the 24th minute.

Two-time defending champion Chile also eased to victory over Japan, which has brought a young squad focused on the Olympic tournament at home next year.

The veteran Chileans won Monday's match in Sao Paulo with two goals by Eduardo Vargas, one by Alexis Sanchez and another by Erick Pulgar.

Colombia didn't have such an easy time against Argentina on Saturday in Salvador, but it showed its strength by closing out the match with two second-half goals by Roger Martinez and Duvan Zapata. The first goal came thanks to a great long pass by James Rodriguez, who got the better of Lionel Messi in the opener at the Arena Fonte Nova.

Messi, Sergio Aguero and Angel Di Maria — the only remaining players from the teams that lost the finals of the World Cup in 2014 and the Copa America in 2015 and 2016 — couldn't lead the team to the opening victory in Brazil.

Now the Argentines need a good result against Paraguay on Wednesday in Belo Horizonte to avoid the risk of an early elimination.

Without the injured Neymar, Brazil managed to get the victory against Bolivia on Friday but the team was jeered by the home fans at Morumbi Stadium after struggling in the first half.

Philippe Coutinho, taking over Neymar's leading role, scored twice early in the second half, including from a penalty awarded by video review. Substitute Everton closed the scoring late in the game.

The first round of matches was marked by low attendances.

The biggest crowd was at Brazil's opener, when nearly 50,000 fans made it to the Morumbi. It was a disappointing crowd, though, as organizers had announced that nearly 70,000 fans were expected.

The average attendance for the first six matches was about 25,000, but a couple of games had less than 15,000 spectators — Uruguay vs. Ecuador and Venezuela vs. Peru.

The 2-2 draw between Paraguay and Qatar was the most exciting match of the first round, with the South Americans squandering a 2-0 lead late in the second half.

The least exciting match was the scoreless draw between Peru and Venezuela in Porto Alegre, in front of only 13,370 fans. Peru had two goals disallowed by video review.