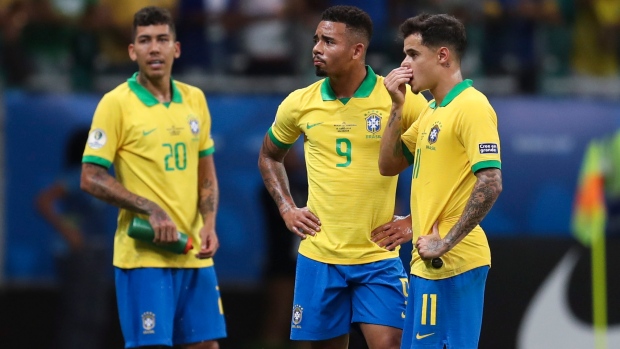 SALVADOR, Brazil — Brazil was left frustrated by both the Venezuela defence and video assistant refereeing after another lacklustre outing at the Copa America.

The Brazilians had two goals disallowed by VAR, which is being used in the South American tournament for the first time, during a 0-0 draw with Venezuela on Tuesday in which they heard boos for the second straight game.

Chilean referee Julio Bascunan consulted VAR to wipe out scores from Gabriel Jesus at the beginning of the second half and Philippe Coutinho near the end of the game.

Brazil coach Tite had no complaint over the decisions.

"Justice was made," he said. "We had a lot of possession, but we were not effective."

Brazil had almost two-thirds of ball possession but was unable to break through against Venezuela goalkeeper Wuilker Farinez. Roberto Firmino also had a first-half goal disallowed for a foul before he scored.

The Brazilian fans' voiced their frustration once again after having done so in the opening 3-0 win over Bolivia.

The result wasn't for lack of trying according to forward Everton, who was brought on as a substitute in the second half.

"I try to do my best when I have the chance to come in," he said. "Today I thought I would contribute, but the goal was disallowed in the end. We feel sad about that, but life goes on."

Despite the result, Brazil remains at the top of Group A with four points, tied with Peru.

VAR also played a part in Venezuela's opener as it had two goals disallowed in a 0-0 draw with Peru.

"The VAR is welcome, long live the VAR," coach Rafael Dudamel said. "Against Peru and today against Brazil we have taken the advantage. It is not as if they had given us a gift. Justice was made and we have to keep believing in those that make justice."

In the final group games, Brazil faces Peru in Sao Paulo and Venezuela takes on Bolivia in Belo Horizonte.

The top two teams in each group advance, as do the two best third-placed teams..