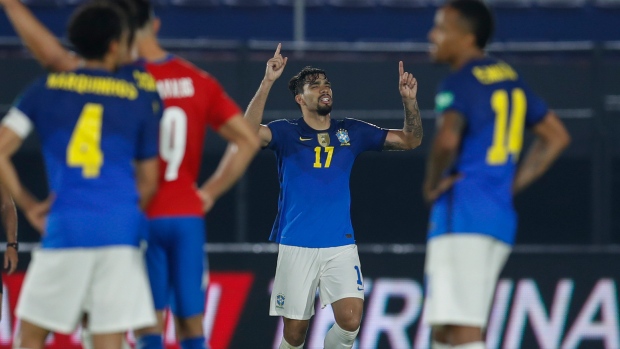 SAO PAULO (AP) — Brazil moved further ahead in South American World Cup qualifying on Tuesday with a 2-0 win at Paraguay, its sixth in six matches on the road to Qatar.

The Brazilians are now six points clear of second place Argentina, which drew 2-2 at Colombia after squandering a two-goal advantage.

Earlier, Miguel Borja scored an equalizer for Colombia in the last seconds of added time against Argentina in one of the best matches yet in South American qualifying.

Colombia goalkeeper David Ospina was the best player on the pitch, stopping Lionel Messi and his teammates on multiple occasions.

The game at the Metropolitano stadium in Barranquilla was attended by 10,000 fans despite the region's alarming COVID-19 figures.

The top four teams in South American qualifiers will advance automatically to Qatar 2022. The fifth-place team will go into an inter-continental playoff. The current standings show Brazil leading the 10-team competition with 18 points, followed by Argentina (12), Ecuador (9) Uruguay and Colombia (8).

The atmosphere in the Brazil camp has been heavy ever since last Friday's win over Ecuador. Players did not speak publicly amid a possible revolt against Copa America in their home nation. And coach Tite didn't answer questions as to whether he would remain in the job despite tensions with the management of the Brazilian soccer confederation.

On Sunday, the president of the confederation, Rogério Caboclo, was suspended from office after an accusation of sexual harassment emerged.

But none of that affected with the team's mentality for the match against Paraguay.

Neymar opened the scoring in the 4th minute after a cross from Gabriel Jesus. And Lucas Paquetá closed the deal in added time with a classy touch that hit the right post before finding the back of the net.

“We know how difficult it is to win here — it hasn't happened to Brazil since 1985,” defender Marquinhos said. “We are glad we have this advantage on the table. It was a match of details. And scoring early on gave us the tranquility we needed. It forced Paraguay to come at us.”

Paraguay is now in sixth position with seven points.

As in recent weeks, police officers in Barranquilla used water canons and tear gas against dozens of protesters, who responded by pelting rocks and other objects. Colombian streets have been rocked by demonstrations since the end of April. Some tried to break into the stadium, but were stopped.

Argentina scored twice in the first eight minutes. Cristian Romero headed past David Ospina in the 3rd minute and Leandro Paredes doubled the lead in the 8th after dribbling through the middle of Colombia's defense and gently sliding a shot into the back of the net.

But Colombia lifted in the second half, as Argentina was either failing at the finishing or being stopped by Ospina. Argentina's Nicolás Otamendi conceded a penalty and Luis Muriel scored from the spot at the 51st. But just when it appeared Argentina would take another step closer to the World Cup with an away win, Borja's header triggered wild celebrations for the hosts.

“We had a great first half, we pressured and scored twice," Argentina's Lautaro Martínez said. “In the second we could not keep our pace, we were tired. What matters is that we got a point.”

It was Colombia's second match under coach Reinaldo Rueda, who took over after Portuguese coach Carlos Queiroz was fired. Last week the team beat Peru 3-0 in Lima.

“We never stopped believing and we got a very tough draw," Juan Guillermo Cuadrado said. “During halftime coach Rueda asked us to be very focused and attack them. This was an important moment, we wanted three points, but the draw suits us.”

Chile had the chance to move into one of the top positions if it had beaten Bolivia at home, but the match ended 1-1. Erick Pulgar opened the scoring for the hosts in the 69th minute, but Marcelo Martins equalized from the spot in the 82nd.

Chile ended the round in seventh position with six points, one point ahead of Bolivia.

Peru won its first match in this edition of World Cup qualifiers, thanks to two assists from Peruvian-Italian Gianluca Lapadula. In the 61st he found Christian Cueva in the box and in the 88th he assisted Luis Advíncula, who shot from close range.

Peru remains at the bottom of the 10-team round-robin group, but now with four points. Ecuador remains third.

Uruguay drew 0-0 at ninth-place Venezuela in a match with few exciting moments.

Recent matches in World Cup qualifying — the first since November because of travel restrictions in place for the COVID-19 pandemic — were also be preparatory for this month’s Copa America, which is set to be staged in Brazil after Argentina and Colombia were dropped as co-hosts.

The next matches in South American World Cup qualifiers will be played in September and October.