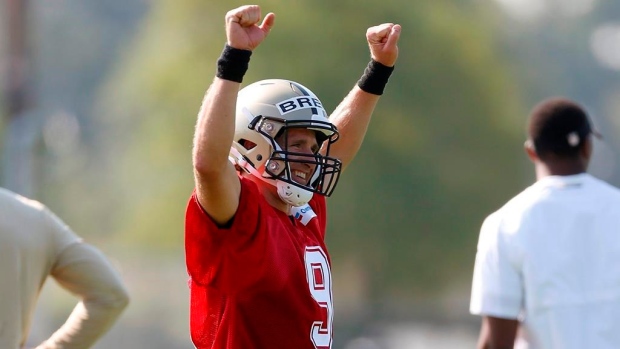 Following the first practice of his 18th training camp on Thursday, the 39-year-old Saints quarterback openly acknowledged how little might be left of his career. But he also expressed a determination to make the most of it.

"I understand that I don't have a whole lot of time left," said Brees, who'll be 40 in January and whose contract expires after the 2019 season. "You've got to work and have high expectations and sacrifice and do maybe even more now than I ever have."

Brees figures wisdom and experience have improved his game mentally in ways that mitigate the physical effects of aging, but that's not what he attributes most to his longevity.

He considers the single most significant evolution in his game over the past half-decade to be his increased emphasis on throwing mechanics — the placement of his feet, the rotation of his torso, the angle of his arm motion, the point at which he releases the ball, and so forth.

Brees regurgitates odd-sounding terminology he's learned from reputed throwing guru Tom House, such as "ankle eye," meant to convey the idea that if the inside ankle of a thrower's push-off leg had an eye, it should be "looking" toward the target.

"I didn't think a whole lot about mechanics until about six years ago. I think I was just kind of a natural thrower. Like, I'd always been a pitcher in baseball, or shortstop," Brees said. "So you kind of reach a point where that's so second-nature that you just do it, and yet you don't really understand the elements of why are you able to get velocity, or the components that go into being an efficient thrower and being really accurate.

"As you get older, you begin to develop more of an appreciation for that," Brees continued. "Your physical skills begin to diminish, right? But you want to make those things repeatable and correctable if you do get off track. So, I'd say I've become more in tune with my mechanics."

It was hard to argue with the results during team drills Thursday, when Brees heaved a pinpoint pass over the top of the secondary to rookie receiver Tre'Quan Smith for a touchdown covering about 60 yards.

But when Brees misses a throw, he says he knows "exactly why I missed it," giving various examples of what might have gone wrong. "My feet were out of whack. Or, I didn't get proper rotation, or I let my (non-throwing) arm get outside the framework of my body; I didn't stay closed long enough. I didn't have my front shoulder down. I didn't have my ankle eye" facing the target.

In 2011, when Brees was 32, his 5,476 yards passing set a single-season NFL record eclipsed only once since, when Denver's Peyton Manning passed for one yard more in 2013.

Last season, Brees passed for 4,334 yards, his lowest total in 12 seasons with the Saints. Yet, Brees also reclaimed the NFL record for single-season accuracy with a 72 per cent completion rate, topping his previous high of 71.2 in 2011, which was an NFL record until it fell to Sam Bradford (71.6) in 2016.

Meanwhile, the Saints were back in the playoffs last season, bolstered by a strong running game and improved defence. So Brees didn't see his 2017 yards passing total as a harbinger of decline.

The success of the running game "allowed us to stay more committed to it," Brees said.

And with a better defence, "we didn't have to take as many chances offensively and have to throw the ball — push the ball down the field," Brees continued. "Those are all good things."

Brees still talks of playing as long as possible, but eschews bold predictions about lasting into his mid-40s or beyond, unlike New England's Tom Brady .

And what about family? Brees has four children younger than 10, but says he doesn't see his desire to be involved in their lives as a detriment to his football career. Rather, he contends, it makes him more focused when he is at Saints headquarters.

"I have to be able to leave this facility and go be with my family, be with my wife, be with my kids. They help balance me out," Brees said. "That enjoyment in my life helps me be a better football player and it also forces me when I'm here to be as efficient as possible, because I know now my time can't run over. I can't say, 'Oh, I'll stay an extra hour.' No. I have to get my work done by this time, so I get home and read my kids a book before they go to bed — or else I miss that opportunity and then that eats at me and then it throws off my balance."

Of course, good balance helps with throwing — for Brees, in more ways than one.