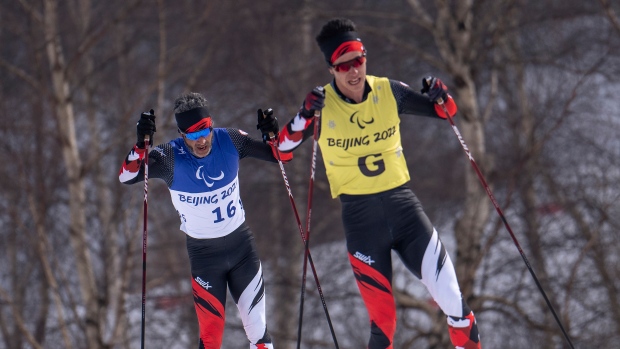 It was a happy coincidence that Brian McKeever wore bib No. 16 on Saturday.

McKeever wrote a golden closing chapter to his remarkable career, cruising to victory in his final individual event at the Beijing Paralympics with guide and longtime friend Graham Nishikawa. The 42-year-old from Canmore, Alta., has swept the podium in all three individual cross-country events for four consecutive Paralympics.

But it's never been about making history for McKeever, rather, taking it one race at a time and enjoying the journey.

"I've never thought about (the record)," McKeever said. "And, to be perfectly honest, that wasn't the goal. It was just about trying to have a good day, and that's what we've always done, we've tried to have our best day on the day. Performance on demand is very, very difficult to achieve. And with the fact that we've done it for years ... I'm proud of what we've done here. Especially as a bunch of aging veterans."

Canada's Natalie Wilkie captured her third medal of the Games, a silver in the women's 10K cross-country race.

The Canadian team has 23 medals -- eight gold, five silver and 10 bronze -- and will finish third behind China and Ukraine. Canada will add at least one more to that total, a guaranteed gold or silver in Para hockey on Sunday morning. The cross-country relay also has a solid medal chance. Canada's medals will mark the second best winter Paralympics in history, after the 28 medals captured four years ago in Pyeongchang.

McKeever, who started to lose his eyesight at age 19 due to Stargardt's disease, an inherited degenerative condition, covered the 12.5-kilometre course Saturday in a time of 33 minutes 6.6 seconds. He and Nishikawa wore No. 16 as the final skiers to push off the start line. They methodically picked apart the field in synchronized ski strokes en route to victory.

"(McKeever) is in amazing shape. He definitely put me under. I had my work cut out for me today and I was absolutely spent at the line," Nishikawa said. "We’ve had such a long journey together, so it was really special to be able to do it one more time and I just wanted to make sure we had a good race today.

"Brian makes it look easy, but I have had a front-row seat to seeing what he does, and it is incredible. He works so hard. He is so professional, and he loves skiing. It was a fun day for me."

"Brian is amazing," Modin said. "He’s been pushing up front for so many years and showing what a Para-athlete can do. He has pushed the quality level of our circuit and Para sport. We have to be thankful for everything he has done for us."

McKeever said the pandemic made him appreciate competing in Beijing even more.

"It's a hard job," he said. "You want to keep being at the top, to keep the lifestyle that we've grown accustomed to, the travel, the experiences, the adventures, and all that stuff is very, very near and dear to our hearts.

"We've always tried to enjoy those adventures, especially the past year, two years ago without being able to travel through COVID. As much as you understand that everybody's in the same boat, and we're trying to protect each other and we did the best we could, there was a mental hit for sure. It made us far more thankful ... and we realize why we love it, and what we’ll miss when we're done."

Wilkie, a 21-year-old from Salmon Arm, B.C., who won gold in both the sprint and long-distance races earlier in the Games, captured silver Saturday in 41.45.3, despite falling on the final downhill portion. The course had also turned to mush in the 14 C heat at Zhangjiakou National Biathlon Centre.

"This is amazing. I know it isn't the gold medal, but I can’t believe it," Wilkie said. "This was one of the toughest races I have ever been in. Coming off the start line I knew it was going to be a rough one because the snow felt like I was stepping through a metre of slush."

Wilkie skis with one pole after losing four fingers on her left hand when she got it stuck in a jointer machine in a high school woodshop class. She now has six Paralympic medals, climbing the podium three times in a spectacular Paralympic debut in Pyeongchang as a 17-year-old, the youngest member of Canada's team at those Games.

This report by The Canadian Press was first published March 12, 2022.