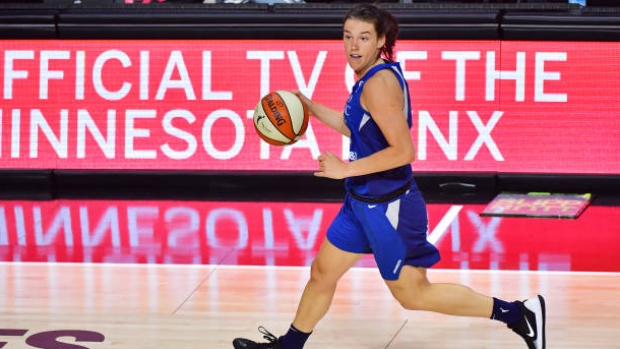 All four players suited up for Canada at the 2020 FIBA Women’s Olympic qualifying tournament where they punched their ticket to the Tokyo Olympics now scheduled for 2021. At the WNBA level, one Canadian in particular had a breakout this past week that made headlines, while another got her team back in the win column.

Watch the WNBA double-header on Monday night with the Phoenix Mercury battling the Dallas Wings at 7 p.m. EST/4 p.m. PST followed by the Chicago Sky taking on the Seattle Storm at 9 p.m. EST/6 p.m. PST on TSN2 and streaming on TSN.ca, the TSN App and TSN Direct.

In her first career WNBA start on Aug. 5, Chatham-Kent, Ont. native Carleton took full advantage for the Lynx. Lining up against Nurse and the Liberty, the 23-year-old dropped an impressive 25 points with seven rebounds and three assists on 11-of-16 shooting and made all three of her three-point attempts.

It was a breakthrough performance from a player who has struggled to establish herself at the professional level after a good college career at Iowa State, where she was named a second-team All-American in her senior year. Drafted by the Connecticut Sun in 2019, she was waived by the team before catching on with the Lynx late last season.

After barely playing in 2019, Carleton has played 20+ minutes in her last four games, including a 15-point effort in a loss to the Los Angeles Sparks. She became just the third player in league history, after All-Stars Candace Parker and Lynx teammate Napheesa Collier, to record at least 25 points and five rebounds in her first start.

Carleton's fellow Canadian on the Lynx, Milton, Ont.'s Alexander, has played limited minutes this season, with her most recent game being two points and three rebounds in the win against the Liberty. The Lynx own the second-best record in the WNBA at 5-2, behind only the Seattle Storm at 6-1.

On the opposite end of the league standings is the rebuilding Liberty, who sit last in the WNBA at 1-6 to start the season. Losing No. 1 pick Sabrina Ionescu to an ankle injury in the third game was a huge blow for a team already relying heavily on the rookie.

Despite being hobbled by an ankle injury suffered in the first game, Nurse has been a steady veteran presence for a team struggling for wins. The Hamilton, Ont. native has two 17-point performances in her last four games, including one in their first win of the season against the defending champion Washington Mystics.

Still, Nurse has struggled this season with her shot, shooting just 21.9 per cent from the field. She struggled early last season in that area before improving enough to earn an All-Star spot.

For the Fever’s Achonwa, a hamstring injury has limited her early on in the season to just three games and she hasn’t played since July 31 against the Wings. Prior to the injury, the Toronto-born Anchonwa was averaging 5.3 points per game, 5.7 rebounds per game on 58.3 per cent shooting coming off the bench. The Fever are 3-4 in their first seven games and sit ninth in league standings.