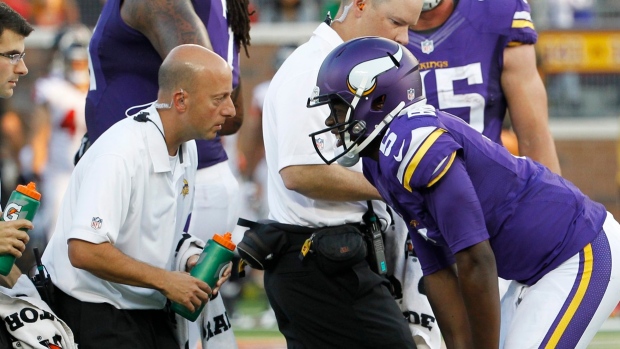 EDEN PRAIRIE, Minn. - The Minnesota Vikings have not committed to quarterback Teddy Bridgewater playing at Green Bay on his sprained left ankle.

Two days after the injury he was "doing much better," according to coach Mike Zimmer, but Bridgewater didn't participate in practice Tuesday.

Zimmer said Bridgewater's work Tuesday would be more mental than physical. The team planned to have Bridgewater try running on the ankle he hurt against Atlanta in his first career start. Bridgewater said he had yet to throw the ball.

The Packers have said they're preparing for Bridgewater to play Thursday, and Zimmer said he doesn't have doubt about Bridgewater's availability. But the Vikings coach also said he's taking the rookie's status "one day at a time."

Bridgewater said he's become well-acquainted with athletic trainer Eric Sugarman and his staff since he was hurt Sunday.