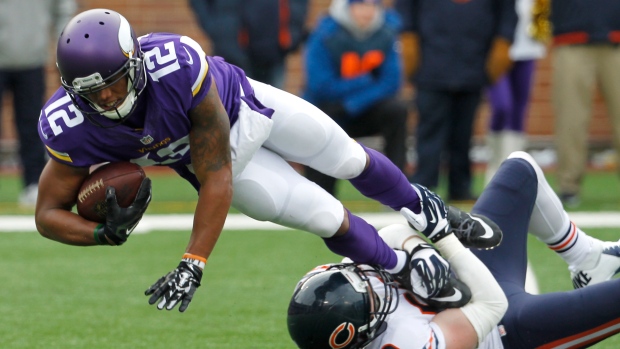 MINNEAPOLIS - The Minnesota Vikings were just getting started, with a rookie quarterback and a first-time head coach in Mike Zimmer so eager to maintain momentum he told the players to report to practice in a few days.

The Chicago Bears played again as if they were ready for this season to be over.

Teddy Bridgewater threw the go-ahead 44-yard touchdown pass to Adam Thielen in the third quarter, guiding the Vikings to a 13-9 victory on Sunday to slap one more blemish on a forgettable year for the Bears.

"I don't want to stop. I want to keep going," Zimmer said, joking that he gave the players a day off on Monday. They countered that they'd see him in April instead.

Bears coach Marc Trestman might not make it until Tuesday.

"I expect to be back. I couldn't look at it any other way or with any other kind of focus," Trestman said.

Blair Walsh kicked two field goals, linebacker Audie Cole had 11 tackles, three assists and a pass breakup in his first start of the season and the Vikings (7-9) ended Zimmer's first season on a winning note. Bridgewater was so thrilled by Zimmer's first NFC North win that he gave him the ball from the last snap of the game.

"I was so excited and so caught up in how well the guys played today. We showed a lot of character," said Bridgewater, who went 17 for 25 for 209 yards to finish 6-6 as a starter in his first year.

Jay Cutler returned from a one-game benching with 172 yards on 23-for-36 passing without a fumble or an interception, but he rarely threw long and the offence was off all afternoon with a series of unforced errors. The Bears (5-11) finished with their worst record in 10 years.

"I don't think anyone knows what's going to happen," said Cutler, acknowledging his own uncertain status. "No one knows what direction we're going. But I'm pretty confident that we'll know relatively soon."

After the Vikings drove to the 3, Matt Asiata was stuffed for no gain on the same play on third-and-1 and fourth-and-1 to give Cutler and the Bears one last opportunity with 2:53 left and a four-point deficit.

They bungled it, metaphorically for this mess of a season. Three penalties, including two false starts, plus an incompletion doomed the drive.

"Just boneheaded mistakes sometimes, and it happens to all of us," said Matt Forte, whose eight receptions gave him an NFL-running-back-record 102 for the season.

From players to coaches on up to general manager Phil Emery, just about every key figure entered the off-season on a tenuous note as the Bears missed the playoffs for the fourth straight year after reaching the NFC championship game following the 2010 season.

Alshon Jeffery had only two catches for 34 yards after totalling 23 receptions, 384 yards and three touchdowns over the past two games against the Vikings. Without Brandon Marshall to attract attention elsewhere, the Vikings led by cornerback Xavier Rhodes had Jeffery well under control.

Kyle Fuller intercepted a short pass by Bridgewater that was behind Cordarrelle Patterson but bounced off both of the wide receiver's hands. Fuller reached the end zone with his return, but the replay revealed his knee was down at the 9-yard line.

Bridgewater responded with a bang, connecting with Thielen for 22 yards and finding him wide open for the score on the ensuing play for a 10-6 lead when Fuller and safety Brock Vereen blew the coverage.

"It's huge for our confidence going into next year. We had a good team, and we just had a lot of close games that we lost," Thielen said. "We want to be in the playoffs."

NOTES: Forte took the record from Larry Centers, who had 101 catches for Arizona in 1995. Forte also topped 1,000-yard rushing mark for the fifth time in seven years. ... Asiata had 91 yards on 19 carries, including a season-long 19-yard run, to finish with a team-leading 570 yards rushing. He had 10 touchdowns and 882 yards from scrimmage. ... Cole had an interception negated by an offside penalty on Corey Wootton, but Cutler finished turnover-free for only the third time in 15 games this season. ... Bridgewater finished with a 64.4 completion rate, the third-highest by a rookie in NFL history behind Ben Roethlisberger (66.4) and Robert Griffin III (65.6).