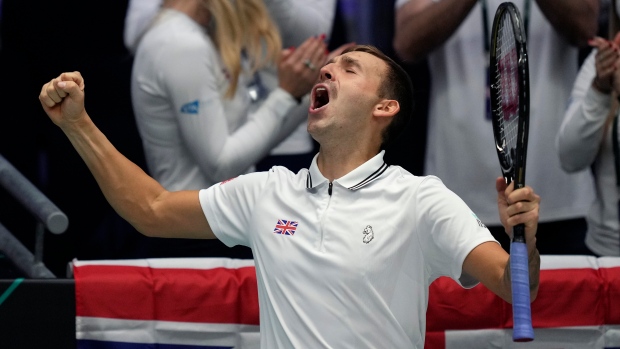 Not even Novak Djokovic playing back-to-back could help Serbia avoid losing to Germany in the Davis Cup finals group phase on Saturday.

After Djokovic helped Serbia pull even at 1-1 by beating Jan-Lennard Struff, the world’s top-ranked male player immediately joined Nikola Cacic in doubles. But German pair Tim Puetz and Kevin Krawietz showed more mettle in a tight 7-6, 3-6, 7-6 victory to take the decider and the tie victory 2-1.

“It’s a great performance to beat the team who have the world No. 1," Germany captain Michael Kohlmann said. "Before the tie, we all thought that we had a good chance. We really believed it and it paid off.”

Serbia could still go through to the quarterfinals, which will include two runners-up to go with the six group winners. But Germany can seal its spot as the Group F winner with a victory over Austria, which Serbia has already beaten.

Playing without a public in Innsbruck due to virus restrictions by Austrian authorities, Germany took the lead when Dominik Koepfer downed Filip Krajinovic 7-6, 6-4.

Djokovic defeated Struff 6-2, 6-4 in the Serb's 50th Davis Cup match. After a short break, he was back out there for the doubles that lasted more than two hours.

“We will have to wait until tomorrow and see (if we advance),” Serbia captain Viktor Troicki said. “Filip had a tough one, and in doubles, what can I say after this match? A 7-6 loss in the third (set), and we had a lot of chances. I am still proud of my team. It wasn’t our day in the end. I hope we still have a chance.”

Italy became the first team to book its spot in the final eight after it beat Colombia to take two points from Group E, which it also shares with the United States.

Second-ranked Daniil Medvedev helped Russia beat Ecuador, setting up a clash with Spain to decide which will go through as group winner.

Medvedev eased past Emilio Gómez 6-0, 6-2 after breaking his serve five times to give Russia an insurmountable 2-0 lead.

“I wanted to keep it clean from the first to the last point of the match and I am happy to bring the point to the team,” the U.S. Open champion said.

Russia and defending champion Spain have one point in Group A, which is being played in Madrid. They will meet in the Spanish capital on Sunday with expectations of a good crowd.

Britain, Australia and Kazakhstan also won their ties on Saturday.

Rinderknech teamed with Nicolas Mahut to recover the doubles point for France by beating Joe Salisbury and Neal Skupski 6-1, 6-4.

Britain and France have one point in Group C. Britain plays the pointless Czech Republic, which already lost to France, on Sunday with the chance to seal its spot in the quarterfinals.

Sweden was one win away from advancing from Group B after Elias Ymer hit nine aces to beat Mikhail Kukushkin 6-3, 7-6 in the first singles against Kazakhstan, played in Madrid.

But brother Mikael Ymer fell to Alexander Bublik in three sets before the Kazakhs clinched the comeback in the doubles.

Bublik lost his first set but rebounded to win 3-6, 6-4, 6-0 while hitting 10 aces. Andrey Golubev and Aleksandr Nedovyesov then brushed aside Andre Goransson and Robert Lindstedt 6-3, 6-3.

Kazakhstan can clinch its sixth quarterfinals appearance if it beats Canada, which has already lost to Sweden.

Australia staved off elimination after coming from behind to top Hungary 2-1 in Turin.

Australia, a 28-time winner, has one point from two ties in Group D. Croatia has one point before playing Hungary, which has zero.

“It was a war of attrition (for de Minaur),” captain Lleyton Hewitt said. “In doubles our boys were in control, but you never know in doubles. But I think we really deserved it.”