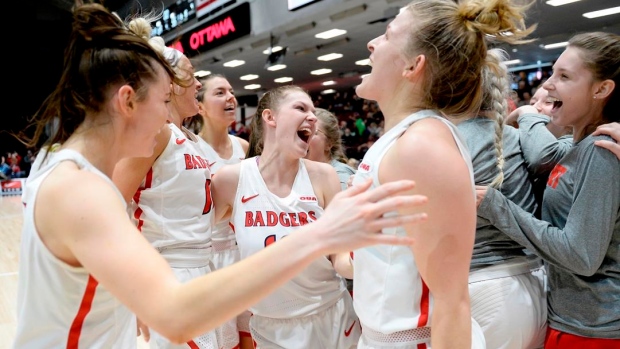 OTTAWA — Lisa Thomaidis was the picture of calm Saturday as her Saskatchewan Huskies downed the Laval Rouge et Or 76-57 in the semifinals of the U Sports women's basketball championship in Ottawa.

While her players mounted a strong defence against a team known for its three-point shooting strength, Thomaidis mostly remained on her seat on the sidelines, elbows on her knees, watching intently. She later downplayed any influence she had in firing them up for the win.

"It's nothing about what I say I can tell you that for sure," Thomaidis said. "They figure it out on their own and they get it done."

The Huskies will take on the Brock University Badgers in the gold medal final Sunday, hoping to win their second ever national title. Brock earned its way into its first final after downing the University of Prince Edward Island Panthers 69-55 in the first semifinal Saturday.

Thomaidis' Huskies have been to the nationals 12 times in the last 13 years and are playing in the gold medal game for the third time in five years.

It's been an emotional four months for the 47-year-old Thomaidis, who lost both her parents over that span.

Just days before her mother's death, Thomaidis was at a tournament in Belgium, in her other role as head coach of Canada's national women's basketball team, where the team booked a ticket to the Tokyo Olympics.

Canada climbed to No. 4 in world rankings in women's basketball, it's best ever position, in November after a second-place finish at the FIBA Women's AmeriCup tournament in Puerto Rico two months earlier. Her father died 10 days after that tournament.

Thomaidis's eyes got a little watery as she spoke about her parents Saturday.

"It's been draining," she said. "It's been really difficult. It's kind of your biggest nightmare."

She said she knew this year was going to be busy, and while her parents had both struggled with their health, she said "you kind of hope 'hey can we just get through this year and I'll have more time to spend wit them.' But unfortunately that wasn't the case."

Now with the Tokyo Olympics just over four months away, she is hoping the world's biggest sporting event isn't cancelled by the COVID-19 outbreak.

"Even talk of that is a little bit anxiety-provoking but hopefully things work out," she said.

At a tournament where U Sports is celebrating 100 years of women's university basketball in Canada and listing the 100 best Canadian female basketball players of all time, Thomaidis stands tall. Her name has become almost synonymous with women's basketball in this country, leading the Huskies for the last 21 years, and as the head coach of the national women's team since 2013.

Thomaidis got her start in the sport as a player, on McMaster University's women's team for five years, and as a professional player in Greece before an injury pushed her into coaching.

Thomaidis is also a stand out as one of just two women coaching teams at this tournament, the first time both the men's and women's championships are being held at the same time. Ryerson's women's coach, Carly Clarke, is the other.

Thomaidis said when she started in 1998, all of the western Canadian women's teams had women coaches, but that dwindled over the years, and Thomaidis said it becomes a self-fulfilling prophecy, where young female athletes are coached by men and then don't see coaching as a viable career.

"I was fortunate enough to be coached by a lot of women and so I just kind of thought that was the norm that you just have a female coach and that's a viable career moving forward. Unfortunately I think that is not the norm. I think that is very not normal."

Saskatchewan has the experience going into Sunday's gold medal game, with all but two players having at least one year of championships experience before. The Badgers won the Ontario conference title last month for the first time in 27 years, and none of the players has been to nationals before.

The Badgers, Thomaidis said, may have less experience but they are hungry.

"They're just fearless," she said. "They don't seem to be playing with any pressure at all."

Badgers fifth year Melissa Tatti said for her the finals are icing because every part of this post-season has been a dream.

"I never really believed or dreamed of this moment," she said.

For Thomaidis, the words of many years of coaching wisdom heading into the final are easy.

"We've been through this and we're ready for it," she said. "At the end of the day we're going to be good enough or not but I really feel like we are playing well right now."

This story by The Canadian Press was first published March 7, 2020.