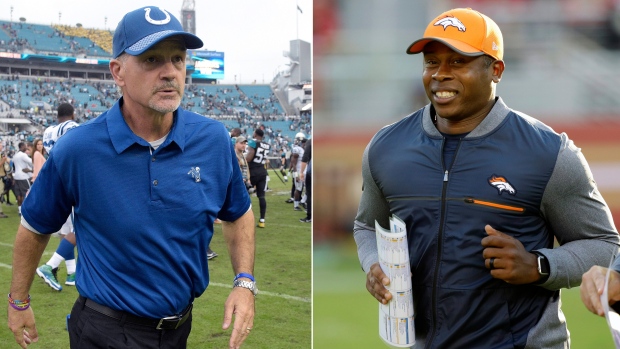 INDIANAPOLIS — Denver and Indianapolis find themselves in the same place with three games left.

Both teams have been eliminated from the playoffs, both coaches face questions about their futures and players from both teams are fighting to keep jobs.

No, it's not how the Broncos or Colts envisioned this season playing out.

But neither intends to use their plight as an excuse to look beyond this season. Instead, they intend to finish strong when the stretch run begins Thursday night.

"You approach it to win a game. It's what we do, it's what our jobs are," Colts left tackle Anthony Castonzo said.

"There's really no need for any extra motivation. We're here to win games every week."

It's a strange spot for a couple of teams that were playoff regulars and Super Bowl contenders not so long ago.

The obstacles they've faced have been daunting.

Indy (3-10) will miss the post-season for the third straight season largely because injuries have forced Andrew Luck to miss 23 of the past 42 games including every game this season and it took time for a rebuilt defence to get in sync.

Denver's offence has struggled as it continues searching for a long-term successor to Peyton Manning, and the Broncos' special teams units have been equally bad.

But Thursday's game gives each team one more chance to show everyone they can start turning things around.

"I told our guys there's going to be one football game on in the entire world," first-year Denver coach Vance Joseph said. "It's going to be our game. We're excited about having a chance to win two games in five days for us, so we're going to embrace this thing. We're coming to play and have some fun."

What can still be achieved?

While the Broncos (4-9) are assured of their first losing season since 2010, they ended an eight-game losing streak with last week's victory over the Jets and hope to snap an eight-game road skid this week.

Indy needs to win each of its last two home games to avoid its first losing season at home since coach Chuck Pagano took over in 2012 and perhaps save his job a third time.

"We sign up to play these games and to win games, so the effort is still there," Colts kicker Adam Vinatieri said. "I think that's one thing that I'm the most proud of with this team is they continue to fight through tough situations and bad outcomes and stuff like that, so I'm expecting the same for the last three games. We're going to try to win them all."

Here are some other things to watch Thursday:

Attendance at Lucas Oil Stadium has steadily dwindled this season. This week, there will be plenty of blue around.

Colts players also will participate by using the all-blue "colour rush" uniforms for the first time. Because they played on Thanksgiving night last year, a game not considered part of the regular Thursday Night Football series, Indy opted to wear its regular uniforms.

"That'll definitely be cool," rookie cornerback Quincy Wilson said. "All blue is going to look real nice out there so ready to make some plays in that all-blue."

One thing that hasn't changed in Denver is the defence.

The Broncos are still rated No. 1 overall and in the top three against the run and against the pass. This week, they could be feasting on sacks.

Indy has allowed a league-high 52 sacks, 10 short of the franchise's single-season record, including 30 in six games against top-10 defences.

Every week, it seems Vinatieri, Frank Gore or both achieve new milestones.

It could happen again this week.

The 34-year-old Gore needs 59 yards from scrimmage to reach the 1,000-yard mark for the 12th consecutive season. Emmitt Smith is the only other player to achieve the feat, doing it a league record 13 times.

Gore also needs to average 92 yards rushing per game over the final three to pass Curtis Martin (14,101 yards) for No. 4 on the career rushing list.

The 44-year-old Vinatieri, meanwhile, is 16 points away from extending his own league record of 100-point seasons to 20.

When the new management team arrived during the off-season, his days were numbered. Kerr signed with Denver in free agency and has had a solid season as he heads into his first game against his former team.

It won't be an easy reunion for Kerr.

"Obviously it's going to be emotional," Kerr said. "I was undrafted and made a team, all that stuff. At the end of the day, business is business, and it's just another game."