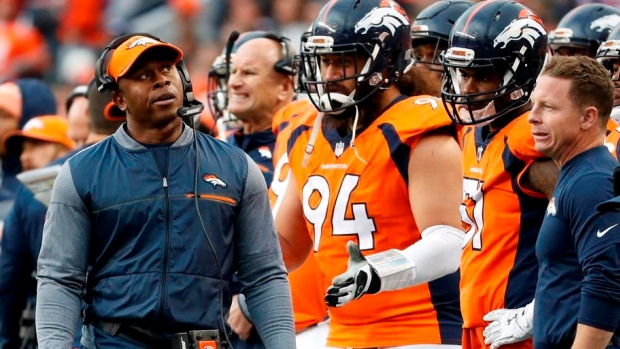 ENGLEWOOD, Colo. — Even though John Elway chose continuity over change, major shifts are afoot for the Denver Broncos in the wake of the team's most disappointing season in decades .

Kubiak returned to the Broncos last summer in a scouting capacity seven months after stepping down as their head coach over health concerns. As a senior personnel adviser, Kubiak scouted college and pro players and provided input on Denver's offence to Joseph, a protege and first-year head coach with defensive roots.

Elway said he considered firing his head coach following Denver's 5-11 finish, which was the worst in his seven seasons as the Broncos' chief football executive.

"It's my responsibility to think about other options to see what would be best for the football team," said Elway, who decided against embarking on a search for his fourth head coach in five years.

Elway said he shoulders some of the blame for Denver's dismal season and aims to fix the roster deficiencies this off-season to give Joseph a better hand.

"Looking back I feel good about the fact that we can stay where we are," Elway said. "With Vance making some changes on his staff ... we'll have a chance to get better."

Joseph said he wanted to "change the culture so we could get back to pushing our players to be the best that they can be and getting our best players to play at their best all the time."

Studesville, whose firing rankled running back C.J. Anderson and other Broncos, is interviewing for the Giants' head coaching job Thursday.

Joseph said he's also taking the interim tag off offensive co-ordinator Bill Musgrave , who was promoted from quarterbacks coach when Mike McCoy was fired midseason with the Broncos in the midst of an eight-game skid that was their longest in a half-century.

"I think how we played offensively after we hired Billy was my vision of offence: to run the football, control the games, play great defence and to minimize the errors by the quarterback," Joseph said.

The Broncos were 5-0 when running the ball more than throwing it and 0-11 when they didn't.

Although they ranked third in the league in defence, they allowed 29 touchdown throws. Only the Giants, with 32, allowed more.

The offence sputtered behind the turnstile trio of QBs Trevor Siemian, Brock Osweiler and Paxton Lynch, who combined for 19 TD throws, 22 interceptions and none of them topped Tim Tebow's career passer rating of 75.3.

Asked if one of the three QBs under contract for next season — Siemian, Lynch and Chad Kelly — could be the starter next season, Elway said, "I don't know," avoiding an endorsement for any of them, all of whom are his draft picks.

Even with a new QB, Elway acknowledged there might not be any quick fixes to return to the playoffs.

"That is our goal. That's our mindset. Whether we can get there or not, I don't want to raise the expectation level by saying, 'Yes, automatically we're going to get back there,'" Elway said.

"But, our goals have not changed for the Denver Broncos and what we want to do — and that's to compete for world championships. Now, we have to build toward that process. That starts now. Hopefully, we can get back to where we're very competitive."

Joseph said he'll change some things in his own approach in 2018.

"Early on in the season, I didn't do a good job of pushing our coaches to make the proper changes that I thought could have helped us," Joseph said. "I allowed guys to coach — that was my goal — but I wasn't very good at coaching the coaches. I'll get better at that. That was one of my shortcomings.

Elway said he, too, is open to blunt self-assessments.

"I don't have all the answers," Elway said when asked what he had learned in 2017. "I want to search and find all the answers because I want this team to be as good as it can possibly be. I'm fortunate in the fact that I played for a long time. I've been in this job now for seven years. So, therefore, I'm always trying to get better. As soon as I think I have it down, I'll retire."