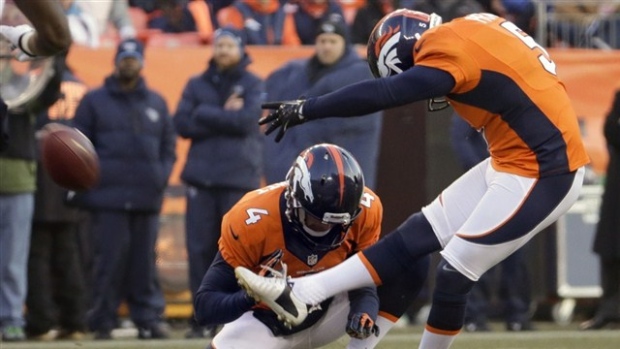 ENGLEWOOD, Colo. - Just 300 days after putting his name in the record books with the longest field goal ever, Matt Prater is history.

At least in Denver.

The Broncos cut ties Friday with the eighth-year kicker who's about to come off his four-game suspension.

That means first-year kicker Brandon McManus has turned his temp job with the AFC champs into a full-time one.

From the moment the Giants traded him to the Broncos in late August, McManus looked at Denver not as a stopover but as a destination. He said last month that his aim was to convince the Broncos he, and not Prater, was their man.

Still, he was surprised he'd done just that.

"I mean, Matt had a great year last year and he's done very well for himself. I still consider him in the top three kickers in the NFL," McManus said. "Just the chance the Broncos are giving me (shows) the confidence they have in me and I'm excited with that opportunity."

That's a difference of more than $4.6 million, money that could come in handy as the Broncos turn their attention to long-term deals with Demaryius Thomas, Julius Thomas and Chris Harris Jr.

McManus, Elway said, "has earned the opportunity to continue kicking for our team with how well he's played to start the season. He has a very strong leg and we have confidence in him on both field goals and kickoffs."

This summer, McManus pushed Giants incumbent Josh Brown just as he had Adam Vinatieri in Indy a year earlier. By sticking with McManus, the Broncos owe New York a seventh-round draft choice in 2015.

Prater had given the Broncos reason to fret not only with his continued slip-ups but also with a poor performance in the preseason, something he blamed on his pending punishment weighing on him.

Prater has been in the NFL's substance-abuse program, which includes alcohol, since a DUI arrest on Aug. 12, 2011. He was originally facing a ban for a full season but his lawyer negotiated a four-game ban instead.

Prater said he realized one more strike meant he'd face sitting out an entire calendar year when he had some beers not long after the Super Bowl.

That price got heavier Friday.

Prater led the league last year by making 25 of 26 field goals, including a record-setting 64-yarder against Tennessee. He also led the NFL with 81 kickoff touchbacks.

Prater missed two of four field goal attempts in the preseason, including a 49-yarder in an 18-17 loss to Houston after learning before kickoff that he'd be suspended.

McManus didn't face a clutch kick in Denver's first three games, but he did everything he was asked, making a trio of short field goals and all eight of his extra points. He also allowed just two returns on 16 kickoffs.

Broncos holder Britton Colquitt said Prater won't be out of a job for long.

"I think there will be at least 20 teams trying to put offers in," Colquitt said. "And he'll be able to have his choice, because he's that good. No one can argue with that. He's probably just in the middle of his career. He could be at Kansas City or Oakland or San Diego."

Some fans took to Twitter to criticize the Broncos for jettisoning Prater when they stuck by two front office executives who were arrested on drunken driving charges in 2013, one of whom is serving a work-release jail sentence.

"Anytime you make football decisions in an organization, especially with somebody that's been with you for a period of time like Matt, it's always difficult," Fox said. "But it's always a football decision, what's going to give us the best chance in our opinion. And I wish Matt nothing but the best moving forward."