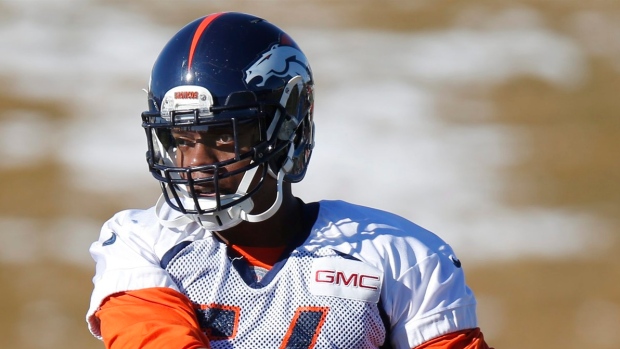 And now the Broncos are getting their MVP back.

Top tackler Brandon Marshall is expected to return to the lineup for Sunday's playoff game against Indianapolis (12-5) after missing the last 2 1/2 games with a sprained right foot.

"Today I felt the best," Marshall said Friday after sprinting for the first time since the injury. "Today was the day that I really woke up and it felt better. I was more confident going out to practice and when I was running it felt great."

Marshall said he made daily progress since returning to the football field Wednesday.

Coach John Fox listed Marshall as questionable for the game, yet all signs point to him playing. Although the coaches and medical staff will have a say, "in my mind, I can go," Marshall said.

"It would be pretty big being able to have him back," Ware said. "He's that linebacker that's calling plays, making big plays, and he's that big playmaker that we need."

Andrew Luck is certainly preparing to face Marshall, whom he called a "stud."

Depending on how much — and how well — he can play, Marshall could return to his every-down role or he might play mostly on passing downs with rookie Todd Davis playing the weakside in the base defence.

Several teammates have talked this week about how much it would mean for Marshall to return and help corral Luck and his terrific tight ends, Colby Fleener and Dwayne Allen. That's been a sore spot for Denver this season — opposing tight ends have collected nine TDs.

"It's a great compliment to know that your teammates think highly of you," Marshall said. "I guess I've made an impact on everybody to make them think that way. I'm just happy, I guess a guy people look for to make plays on this team."

Marshall, toiling on the Broncos' practice squad last season, emerged as the fulcrum of Denver's defence while filling in for linebacker Danny Trevathan, who led the team in tackles last year but sustained a series of knee injuries.

"He did more than step it up," safety Rahim Moore said. "I mean, he's playing like he's been in the league seven, eight years. He's playing at an All-Pro level."

Marshall led the Broncos (12-4) with 110 tackles in the regular season, including 88 solo and 11 for loss. He also broke up nine passes and collected two sacks. Jack Del Rio said he's among the top few linebackers in the NFL and Harris called him the MVP of Denver's star-studded defence.

Marshall sprained his right foot against San Diego on Dec. 14, an injury that provided extra impetus for Denver securing the bye so they didn't have to play without him wild-card weekend.

"We're grateful that we got the bye week," Miller said.

Davis, who only joined the team at midseason, started in his place against Cincinnati and Oakland, playing much better in the latter.

"I thought he did well. I thought definitely improved from Game 1 to Game 2," Marshall said. "Todd's a smart guy, a smart, physical guy. I know he's capable of playing and I know he's hungry. He wants it. That's the thing I like about him the most."

Harris said Marshall helped him from the sideline between series: "He was like an extra coach out there, doing everything he could to get me right."

While working diligently to get back on the field himself.

Notes: DE Quanterus Smith was ruled out for Sunday's game after his surgically repaired left knee acted up Thursday. He was held out of Friday's workout, becoming the only player to miss practice all week. "Our medical staff is looking at it and they think it's best for him and us that he's out for the Indy game," Fox said. ... Former Broncos John Lynch and Terrell Davis are among finalists for the Hall of Fame vote at month's end. "I've been rooting for them for some time," Fox said.