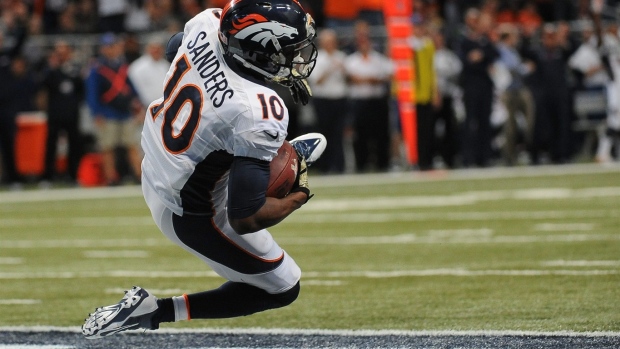 Peyton Manning lost two of his top three targets in the Denver Broncos' 22-7 upset loss to the St. Louis Rams on Sunday.

Tight end Julius Thomas, who leads the NFL with 12 touchdown catches, hurt his ankle in the first quarter. Wide receiver Emmanuel Sanders, who caught a 42-yard touchdown pass Sunday, later suffered a concussion on a hard hit from Rams safety Rodney McLeod on the opening drive of the second half.

McLeod was flagged for unnecessary roughness on the play. Sanders is the Broncos' second-leading receiver, entering the game with 62 catches.

The Browns' big injury came on defence. Veteran linebacker Karlos Dansby hurt his knee in the second quarter of a 23-7 loss to the Houston Texans and could be sidelined for an extensive period.

Dansby, who entered the game leading Cleveland in tackles, pounded the ground in frustration after going down. He is scheduled to undergo an MRI on Monday.

Without Dansby, the Browns struggled to stop the run in the second half and the Texans rolled up 211 yards rushing.

Dansby has had a major impact in his first season with the Browns, who signed the 11-year veteran as a free agent in the off-season. Cleveland is already without massive end Phil Taylor, putting further stress on Cleveland's front seven.

Redskins left tackle Trent Williams injured the MCL in his right knee and his ankle in the first quarter of Washington's 27-7 loss to the Buccaneers.

He will have an MRI on Monday.

The two-time Pro Bowl selection was blocking on a third-down play when Bucs defensive lineman Gerald McCoy accidentally hit the back of his leg.

Williams and McCoy were good friends and college teammates at Oklahoma and were drafted consecutively in the first round in 2010.