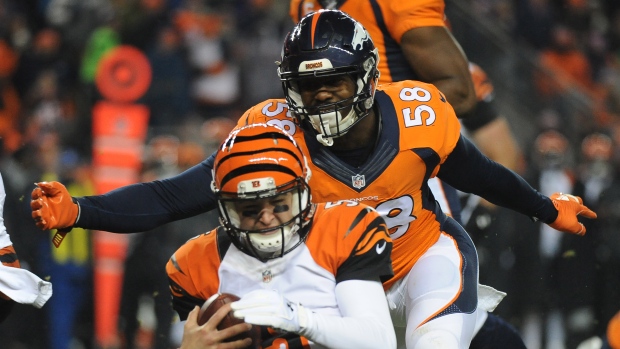 DENVER - Backslaps for the backups.

The backbone of Denver's dominant defence is ready for the rematch Sunday.

Miller and Harris were out with ACL injuries two years ago in the Broncos' 26-16 win over the Patriots, then watched helplessly from the sideline two weeks later as Seattle destroyed Denver's dismantled defence in the Super Bowl.

Denver's duo was eager to face Brady and Bill Belichick, the best QB/coach combo in history with a record 22 playoff wins, a year later when the Broncos admittedly overlooked the Colts and never got that chance.

The top-seeded Broncos (13-4) took care of Pittsburgh and the second-seeded Patriots (13-4) beat Kansas City, setting up a rematch in the conference championship, a 17th and likely final meeting between Brady and Peyton Manning.

Instead of providing moral support this time, Miller and Harris get the chance to dethrone the defending champs.

Also sitting out that conference championship two years ago was Patriots tight end Rob Gronkowski, who had an injured knee courtesy of then-Browns safety T.J. Ward, now delivering those big hits for these Broncos.

Both Ward (ankle) and Gronkowski (knee) were knocked out of the game when these teams met in snowy Denver on Nov. 29, a game the Broncos won 30-24 in overtime.

Also sitting out that game was receiver Julian Edelman, who's back in the Patriots' loaded lineup.

Miller realizes the task is a lot tougher this weekend than it was two months ago.

"We wouldn't want it any other way," Miller said. "That's the beauty of playing in the National Football League: We've got great players going against great players."

Instead of watching on crutches.

Harris displayed his usual bravado this week even though he's dealing with a deeply bruised left shoulder that's been bothering him for three weeks.

Harris drew Patriots fans' ire this week by telling ESPN that if he had to cover Gronkowski 1-on-1, he'd have to take out the talented tight end's knees. Gronkowski, who has a history of knee injuries, responded with an off-colour retort on Twitter. Harris, however, won't face Gronkowski 1-on-1. That task would go to Ward or Aqib Talib.

Either way, Harris and Miller are just glad they'll be suiting up for this one.

Miller, the second overall pick in 2012 who is due for a huge pay raise in the off-season, and Harris, an undrafted free agent whose first bonus was $2,000 and his second one $10 million, saw their paths intertwined after getting hurt in 2013.

They both had their knees fixed by Dr. James Andrews in Pensacola, Florida, and they became workout partners for six months. They reshaped their bodies through organic weight loss and a determination to take some stress off their repaired ligaments. Harris dropped a dozen pounds to 188 and Miller lost more than 25 to get down to 245.

They got their mojo back.

With Miller and DeMarcus Ware providing the pressure and Talib and Harris locking down receivers, the four Pro Bowlers teamed up to create what Steelers coach Mike Tomlin labeled the best pressure-cover combination in football.

One that will be tested Sunday.

Denver led the league in total defence, sacks and pass defence, but New England's spread-and-shred offensive philosophy along with Brady's ultra-quick release is often indefensible and renders his suspect offensive line a non-factor.

"I'm fully confident Chris and Talib and all those guys are going to be able to lock all that stuff down and give us a little bit of time," Miller said. "He's a great quarterback. Sometimes he doesn't even need an offensive line. He knows where he's going to throw the ball. He's got great guys that he's throwing the ball to. We've just got to take advantage of the opportunity when it presents itself."