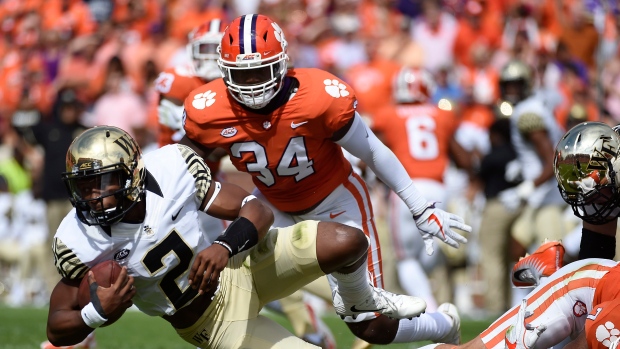 DENVER — A month ago, Kendall Hinton was the guy you’d contact if you wanted some candy bars or merchandise for a high school fundraiser.

On Sunday, he was the Denver Broncos' starting quarterback, a twist befitting the 2020 NFL season during a pandemic that brings twists and turns every day.

Hinton switched from quarterback to wide receiver his final year at Wake Forest in 2019, and he caught 73 passes for 1,001 yards and four touchdowns, good enough to catch the eyes of the Broncos, who signed him after he went undrafted.

But Hinton was no match for the likes of drafted rookie receivers Jerry Jeudy, KJ Hamler and Tyrie Cleveland, so he was cut after training camp and went to work in sales.

The Broncos called him back earlier this month and re-signed him to their practice squad on Nov. 4.

His life took a turn Saturday when Drew Lock, Brett Rypien and Blake Bortles were pulled off the practice field and sent home after the NFL deemed them high-risk close contacts of Jeff Driskel, who tested positive for the coronavirus on Thanksgiving Day.

Turns out, the four QBs had gathered for some film study on their own Tuesday, the players’ day off, “which is commendable,” coach Vic Fangio said after Denver’s 31-3 loss to New Orleans on Sunday.

But the four QBs didn’t wear their mandated masks or keep their social distance, something the league discovered in looking at surveillance footage.

An hour before kickoff, Lock issued an apology, an explanation and a defence in a lengthy Twitter post.

“In a controlled and socially distanced area, we let our masking slip for a limited amount of time. An honest mistake, but one I will own,” Lock wrote, adding, “I sincerely apologize and I fully understand why these safety precautions are so important. Doing the right thing for a majority of the time is not good enough.”

Fangio, whose team fell to 4-7, said he was “disappointed on a couple of levels” that his quarterbacks’ actions put his team and the NFL into a difficult position.

“We count on them to be the leaders of the team and leaders of the offence and those guys made a mistake and that is disappointing,” Fangio said. “Obviously, I haven’t done a good enough job of selling the protocols to them when they are on their own so part of that could fall on me. I thought I was.

“We have emphasized it a lot and we’re really doing good with COVID up to this point ... relative to other teams. There was a failing there and that’s disappointing.”

When the league informed the Broncos that their QBs had violated COVID-19 protocols and had to quarantine, the Broncos pleaded with league commissioner Roger Goodell to postpone their game against the Saints (9-2) a day or two.

Making that argument were Fangio, who was fined earlier this season for not wearing a mask on the sideline, and two executives in general manager John Elway and team president Joe Ellis who were infected by the virus earlier this month.

“I feel like maybe it could have been moved, but at the same time, maybe the league (was) just making an example of us,” said safety Kareem Jackson.

Fangio demurred when asked if the NFL’s refusal to push the game back was unfair, saying that was a question for Elway or Ellis.

For Hinton, it jut wasn't a fair fight.

He completed one of nine passes for 13 yards, threw two interceptions and was sacked once for a passer rating of zero.

“He did everything he could,” Fangio said. “He was excited for the opportunity. We had about a two, three, four-hour window to get him ready, which isn’t a lot, obviously. ... That’s a big, big ask and it just didn’t work out.”

It was both the peak and nadir of Hinton’s athletic career.

“I can easily say that was the most eventful 24 hours of my life, but when I got the call there was pure excitement. Of course, there was nerves and disbelief, but the encouragement the team gave me and guys just keeping me up the whole time, they made it a lot easier for me,” Hinton said, adding he “eventually got some sleep” Saturday night.

On Sunday, the Saints limited the Broncos to a single third-down conversion and Denver became the first team with more interceptions than conversions in a game since the Chargers on Sept. 20, 1998.

When Hinton switched to receiver his senior year, he never figured he’d play quarterback again, but “after a while it’s like riding a bike.”

Or tumbling over the handlebars.

He hadn’t been tackled in two years, so “tomorrow morning probably won’t be fun,” Hinton said. “But it was great to get back out there.

“I would not say this is how I planned it out in my dreams, but it usually doesn’t work out how you want it. So, just getting this opportunity and this experience has been amazing.”