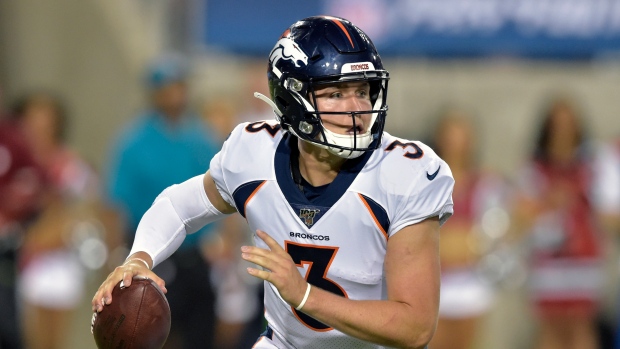 ENGLEWOOD, Colo. — Drew Lock will get the chance to salvage his rookie season in Denver and show Broncos general manager John Elway his next quarterback won't be found on a college campus or in the NFL's bargain bin but right here on the roster.

Coach Vic Fangio said Lock will return to practice Tuesday, nearly three months after the raw right-hander sprained his right thumb in the preseason against the 49ers and landed on injured reserve to start the season.

Lock's return starts a 21-day clock in which the Broncos will have to decide whether to bring him off IR or leave him on, ending their hopes of evaluating the second-round pick from Missouri in a regular-season game this year.

It's that three-week window that prevented the Broncos from bringing Lock back to practice two weeks ago when Joe Flacco (neck) went on IR.

"If we would have brought him back earlier, that would have counted as a week of practice even though we didn't practice," Fangio said. "That was part of that whole equation there.

The priority for the Broncos (3-6) this week, however, is preparing quarterback Brandon Allen for his first career road start Sunday at Minnesota (7-3).

So, the 27-year-old waiver wire pickup from the Rams who beat Cleveland in his NFL debut two weeks ago will get the majority of snaps with the starters this week.

As for Lock, "we'll try and get him as many as we can," Fangio said. "Some of that will be scout team, too. You've got to remember this guy hasn't taken a snap or been in the huddle since the middle of August."

Fangio said no decision has been made whether to bring back Lock down the stretch.

"He'll be determined as one of the two that we can bring off IR," Fangio said. "That doesn't mean that he'll be activated."

One player the Broncos did bring back from IR the week before the bye was wide receiver Tim Patrick (hand), and Fangio said a decision will be made by week's end whether to activate him.

The Broncos don't really have a blueprint for Lock over the next few weeks.

"No, it's not mapped because it's going to be determined by how he looks and what we think," Fangio said.

What exactly will convince the Broncos that he's ready is also nebulous.

"Good quarterback play and that he belongs," Fangio said.

Of course, Allen's play will also play a role in any decision on Lock.

What isn't a factor is the team's playoff prospects.

"Our whole focus is on trying to get to 4-6," Fangio said. "As bad as that sounds, we're trying to win the game we play this week. Whether that includes or doesn't include Drew down the road remains to be seen."

Another player expected to return this week is cornerback Bryce Callahan, who has been on the 53-man roster but hasn't practiced since aggravating a foot injury in July.