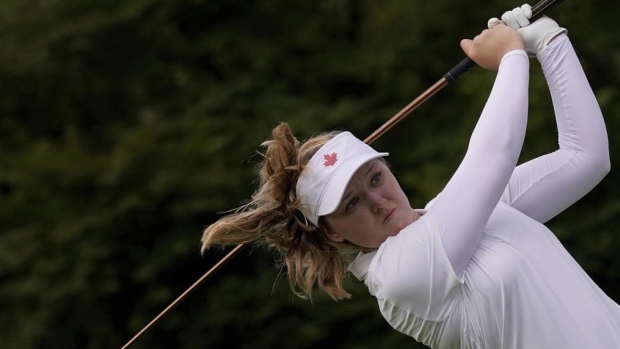 Brooke Henderson searches for her second Major Championship as she takes on Carnoustie Championship Course in the AIG Women's Open. Follow her round all day here on TSN.ca.

*All times are EST*

Henderson finishes her round with a par on the par-4 on the 18th to shot a one-under 71 in the first round of the AIG Women's Open. She currently sits tied for 23rd.

After back-to-back pars, Henderson drops a shot at the par-3 16th and falls back to one-under and sits tied for 24th.

BACK ON TRACK: After the bogey on 12, Brooke bounces back on the par-3 13th to get back to two-under for her round.

Henderson drops another shot with a bogey on the 503-yard par-5 12th. She now sits at one-under and four back of the lead.

Henderson opens up her back-nine with a par on the 422-yard par-4 10th. She remains three shots off the lead.

BOUNCE BACK: Henderson bounces back from her bogey with a birdie on the ninth to move back to two-under and finish the front nine with a 34 and sits just three shots off the lead.

Henderson drops her first shot of the tournament as she cards a four on the par-3 eighth hole.

ANOTHER ONE: Henderson picks up her second birdie of the day on the par-5 sixth, moving her to two-under and just three shots off the lead.

Henderson follows up her birdie with her third par of the round and remains at one-under after four holes.

BROOKE GETS ON THE BOARD: Henderson makes her first birdie of the tournament, moving her to -1 and into a tie for ninth.