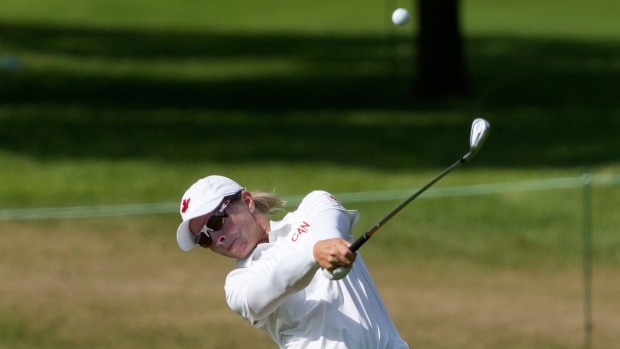 KAWAGOE, Japan — Alena Sharp has a two-step process for putting a bad round of golf behind her: hit the driving range and then write about her day.

Sharp and Canadian teammate Brooke Henderson both struggled on the final holes in the first round of women's golf at the Tokyo Olympics on Wednesday. They both shot rounds of 3-over 74 at Kasumigaseki Country Club, leaving them tied for 47th.

"I'll probably go bang some drivers, get some tension out," said Sharp with a laugh. "I do a journal so I'll go through the holes and write down what I did well on each hole and that will make that go away."

Sweden’s Madelene Sagström was atop the leaderboard after firing a 5-under 66.

Sharp, from Hamilton, opened her round with a birdie on the first hole but then bogeyed on No. 3 to be even par through nine.

"It will be out of my mind by the time I leave here and get in the van (back to the hotel)," said Sharp. "It's just fresh right now, obviously, because it's the last hole

"I'll look at the positives and what can do I better tomorrow on 18, just put it on the fairway like I did and make a better iron swing into the green."

Henderson, from Smiths Falls, Ont., was near the top of the leaderboard for the first nine holes of her round, with a birdie on the par-5 fifth hole helping her keep pace.

But bogeys on Nos. 11, 15, 17 and 18 saw Henderson slide down the leaderboard. Ranked eighth in the world heading into the event, Henderson had previously said she considered the Olympics the sixth major of women's golf.

"Only one birdie on the card today, which makes it tough to score and obviously a rough finish to get I guess 4-over on the back nine," said Henderson. "I feel like it definitely wasn't 4-over worthy, so hopefully tomorrow can clean that up a little bit."

Before the tournament began Sharp and Henderson spoke with their male teammates Corey Conners and Mackenzie Hughes about how to approach the course. Conners had finished 13th in the men's tournament on Sunday and Hughes was 50th.

Conners and Hughes found that being aggressive had helped them in their later rounds but Sharp said Wednesday that attacking the pins wasn't the right play for women, even though the yardages were similar.

"I think it's just a different game for us, we have to be a little bit smarter and use the slopes to get it to the flags," said Sharp. "I don't think you can go right at pins, we just don't spin it like the men do."

Temperatures soared to 36 degrees Celsius with humidity making it feel like it was in the mid-40s.

Although both Henderson and Sharp — who live in Florida and Arizona respectively — said the heat wasn't a major factor in their play, it was undeniable that it affected some. Lexi Thompson of the United States, who was playing in a group with Henderson, lost caddy Jack Fulghum on the 15th hole when he had to be removed from the course due to heat stroke.

"I'm from Florida and I'm still not used to that bad of heat," said Thompson, who had American team manager Donna Wilkins carry her clubs for the remaining holes.

"I just hope that he's OK and he gets the hydration he needs, the nutrients tonight to go into the next few days. If not I'll figure something else out. I just want him to be healthy."

At the end of her round a spectator gifted Sharp a handmade fan with "2020 Alena Sharp" painted on it in Japanese script or kana.

"It's pretty cool," said Sharp. "They just wanted to wish me luck, it's very nice."