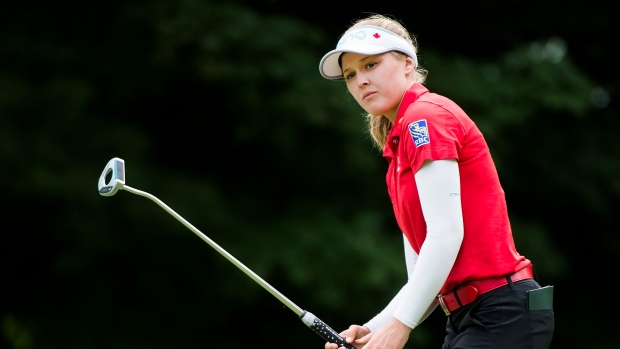 SHANGHAI — Canada's Brooke Henderson hit a hole-in-one and shot a tournament record 8-under 64 to take the lead in the second round of the Buick LPGA Shanghai on Friday.

The 22-year-old native of Smiths Falls, Ont., hit her ace on the 144-yard second hole. She followed that with a bogey, but then birdied four more holes on the front nine, finishing at 11-under 133 total.

The 64 tied Henderson's lowest round of the year.

"I didn't see it at all, and then Olly (Brett), one of the caddies in our group (for Danielle Kang), turned and said, 'That went in,'" said Henderson, who added it was her seventh career hole-in-one. "We were like 'What? Really?' That was pretty cool. It definitely got my day started in the right direction."

Jessica Korda (67) was two strokes behind in second, followed by fellow American and defending champion Danielle Kang (67) in third at 8 under.

Kang holed a 30-yard eagle on the ninth.

"I definitely know that birdies are out there and it's a pretty tough golf course. It's not easy to shoot low," Kang said. "There were a lot of good scores out there today and I know how well these girls can play, so I just got to keep chipping away and keep on trying to make those birdies and see what happens at the end."

Henderson has won twice this year, at the Meijer LPGA Classic in June in Grand Rapids, Mich., and the LOTTE Championship in April in Hawaii. She has nine career titles, most of any Canadian golfer on the PGA or LPGA tours.

"I really like this golf course. I feel like it does suit my game really well,” said Henderson, who is sixth in the world rankings. "You really have to stay patient and pay attention to the wind conditions. It's important to hit a lot of fairways and the greens are so large that you're doing to hit a lot of greens, but the proximity to the hole is really important."

Henderson also had a hole-in-one en route to her win at the Meijer.

"When I have a hole-in-one in past tournaments, it's been a really good thing," said Henderson. "I've gone on to play really well. So I was excited when it happened."

Henderson is fifth on the LPGA money list this season with US$1.373 million in earnings and second in the Race to the CME Globe.

Nasa Hataoka and Amy Yang, who shared the lead after the first round, dropped back. Yang (71) is tied for fourth alongside Marina Alex (67), while Hataoka (73) is tied for ninth.

Top-ranked Jin Young Ko, who is coming off a victory on the Korean LPGA Tour last week, shot a 70 to finish tied for 21st.

Alena Sharp of Hamilton is tied for 29th at even par.