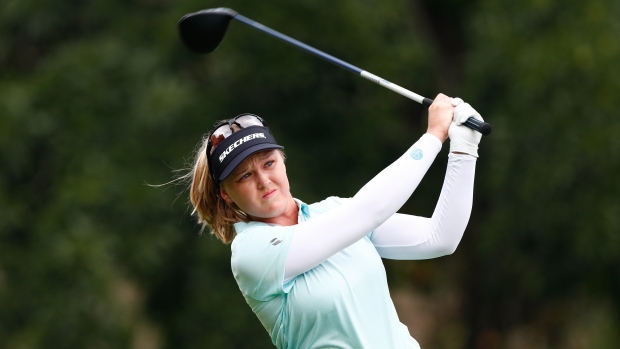 Brooke Henderson has lost count of all the tweaks and adjustments that have been made to her driver heading into The Chevron Championship.

Henderson, from Smiths Falls, Ont., estimates that she's tried over a dozen different shafts ahead of Thursday's first round at The Chevron, the first major of the LPGA Tour season. The switch was necessary as the women's professional golf circuit changed its rules so that a 46-inch shaft was the maximum length allowed, while the 24-year-old Henderson has used a 48-inch shaft since she was 15.

A lot of other changes were made to Henderson's driver, the signature weapon in her arsenal of clubs. But what were those other adjustments?

"Um, good question," said Henderson with a laugh on Wednesday after finishing a pro-arm round at Mission Hills Golf Club in Rancho Mirage, Calif. "Other than it has a Ping head and the same shaft but shorter than my 48, that's pretty much all I know."

Henderson said she has been practising with the new, shorter club leading up to The Chevron Championship, where the rule will come into effect. She said she has been holding the driver closer to the end of the grip, which has also had a weight added to it.

"For further questions on that you have to ask Ping or my representative Scott," said Henderson, again laughing. "But I do know that there's weight in the grip to help with that feeling, as if I was choking up on the 48."

Starting 2022 with strong, consistent play was a priority for Henderson after last year which she said wasn't her best. She said that she worked with her team in the off-season on adjusting several aspects of her play, beyond testing new drivers.

"Short game I think is where I felt like I could really make the biggest difference in my game," said Henderson. "So spending a lot of time around the greens and just mentally, my mindset, was a big change as well."

Regardless of its name, this year's edition of The Chevron Championship will be its last at Mission Hills. It will move to a new location for 2023, likely near Houston.

Henderson said she hopes she can jump into Poppie's Pond on Sunday, a tradition dating back to 1988 where the tournament's winner splashes into the water surrounding the 18th green.

”It's a little bit sad to leave behind the tradition and history that this course and Poppie's Pond have," said Henderson. "It would definitely be an amazing chance to have that last spot in history of making that leap into the pond. That would be very cool."

EPSON TOUR: Hamilton's Alena Sharp and Calgary's Jaclyn Lee are in the same group on Thursday in the first round of the Casino Del Sol Golf Classic at the Sewailo Golf Club in Tucson, Ariz. Selena Costabile of Thornhill, Ont., is the other Canadian in the field.

AUGUSTA NATIONAL WOMEN'S AMATEUR: Savannah Grewal of Mississauga, Ont., was tied for 59th at 7-over 79 on Wednesday after the first round of the Augusta National Women's Amateur. The top 30 players will make the cut after Thursday's round to play in Saturday's final round at the storied golf course.

PGA TOUR: Corey Conners of Listowel, Ont., returns to the Valero Texas Open on Thursday, which he won in 2019. The tournament was cancelled in 2020 due to the COVID-19 pandemic. American Jordan Spieth won it in 2021. Conners is joined by Adam Hadwin and Nick Taylor, both from Abbotsford, B.C., Roger Sloan of Merritt, B.C., Adam Svensson of Surrey, B.C., and Michael Gligic of Burlington, Ont., at TPC San Antonio.

KORN FERRY TOUR: Vancouver's Stuart Macdonald is ranked 64th on the second-tier Korn Ferry Tour, moving up from 117th after tying for ninth at last week's Lake Charles Championship. He's playing again this week at the Club Car Championship at The Landings Club in Savannah, Ga. David Hearn of Brantford, Ont., will also be in the field.