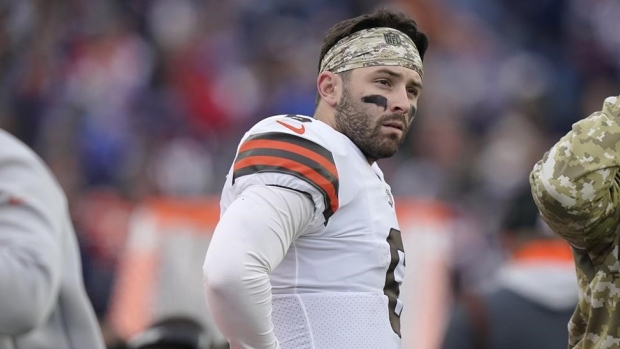 BEREA, Ohio (AP) — The timing wasn't lost on Baker Mayfield, who raised his voice to compete with an emergency siren screaming nearby as he began his weekly news conference.

When someone asked if he had called an ambulance, the Browns' battered quarterback smiled.

At least Mayfield's sense of humor is intact. The rest of him is a little off-kilter.

Mayfield, who is dealing with shoulder, foot and knee injuries, was kept out of practice on Wednesday to let some of his issues heal so he can possibly play this week against the winless Detroit Lions.

Mayfield has played most of the season with a torn labrum and fracture in his left, non-throwing shoulder. He suffered a bruised right knee in Sunday's loss to New England, which came a week after he hurt his left foot at Cincinnati.

“This is probably the most beat up I’ve ever been in my career, and it’s not like it’s one particular thing, it’s multiple,” said Mayfield, who limped slightly as he walked to the podium to speak with reporters. ”It's just that time of year."

But it's also a critical stretch for the Browns (5-5), whose playoff hopes are fading with each loss.

After hosting the Lions (0-8-1), they'll begin a unique three-week stretch in which Cleveland will face Baltimore, get its bye, and play the Ravens (6-3) again with perhaps the AFC North on the line.

At this point, Mayfield plans to play again this week — he missed one game with the shoulder injury — but said he won't push things by practicing.

“There’s no reason to make things worse if I don’t need to,” he said. "I have plenty of time until Sunday, so we’ll see what happens.”

Browns coach Kevin Stefanski said he was “confident” Mayfield will play against the Lions, who managed a 16-16 tie at Pittsburgh last week.

“Baker is as tough as they come," Stefanski said. "He's sore. He's fighting through it. That's kind of what you expect from him.”

Mayfield wore black athletic sweatpants, a hooded orange top and baseball cap when he walked onto the practice field to join his teammates during the portion of practice open to reporters.

There's a chance he won't be doing much practicing this week with his assortment of medical maladies.

Earlier, the 26-year-old acknowledged that his injuries have had a role in him playing inconsistently.

He has just nine touchdown passes in nine games.

“Yeah, there’s definitely a couple plays where I look back and say I should have used my feet here and there, but you have to adapt,” Mayfield said. “Nobody is going to feel bad for you. It’s not an excuse. You just have to find a way to make a play.”

Mayfield's injuries are just one of the variables curtailing the Browns' passing attack. Cleveland hasn't thrown for more than 217 yards in any of its past five games.

With running back Nick Chubb (COVID-19) and Kareem Hunt (calf) still sidelined, the Browns are currently somewhat one-dimensional. Further, Stefanski gave up on the running game when the Patriots got up by two scores.

Mayfield threw just one pass toward his wide receivers at New England, and on Tuesday, Jarvis Landry, who has been slowed by a knee injury, expressed frustration at not getting more touches.

“We’ll find ways to get Jarvis involved back in the game plan, there’s no doubt about that,” he said. "He’s a tempo-setter for us. He’s an extremely good leader and locker room guy for us, everybody knows that.

“We’ll find ways to get the ball in 80′s hands and get going again.”

NOTES: NFL sacks leader DE Myles Garrett also missed practice because of an unspecified personal matter. ... Landry (knee) and Anthony Schwartz (concussion), CBs A.J. Green (concussion) and Troy Hill (neck) and DT Malik Jackson (knee) were sidelined as well. ... Stefanski did not have an update on Chubb or PR/RB Demetric Felton, who were both placed on the reserve/COVID-19 list last week. ... Hunt worked outside with trainers, but Stefanski ruled him out from returning this week. Hunt has missed Cleveland's past four games.