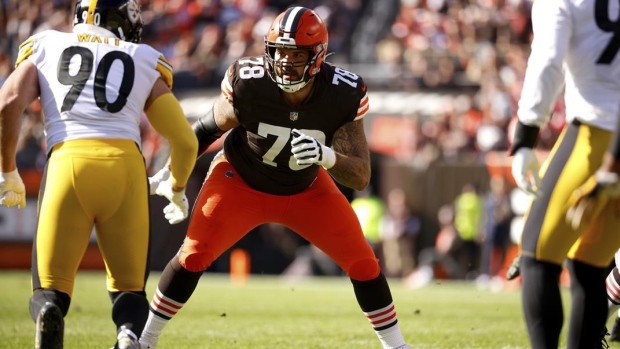 CLEVELAND (AP) — Cleveland Browns All-Pro right tackle Jack Conklin's season is officially over: The team placed him on injured reserve again on Tuesday, two days after he suffered a torn patellar knee tendon in a loss to Baltimore.

Conklin was playing for the first time since coming off the IR after missing three games. He dislocated his elbow on Oct. 31 in a game against Pittsburgh.

He got hurt Sunday night while pass blocking on the Browns’ second possession against the Ravens. Conklin’s knee collapsed under him as he backpedaled. He struggled walking to the sideline before being carted to the locker room.

On Monday, Browns coach Kevin Stefanski said he was sick about losing Conklin, who has been instrumental in Cleveland's success over the past two seasons.

The Browns (6-6) signed Conklin to a three-year, $42 million free-agent deal before last season to fix a troublesome hole up front. He spent his first four NFL seasons with the Tennessee Titans.

The 27-year-old Conklin is facing a long rehab from the injury, which typically requires six months to a year of recovery time.

Blake Hance appears to be his likely replacement, though Stefanski didn't commit to him on Monday. The Browns have a bye this week before facing the Ravens again on Dec. 12 and could be considering some lineup changes.

Hance didn't have much experience playing tackle before having to fill in for Conklin. The Browns lost solid backup Chris Hubbard earlier this season to an injury.

"Blake is a very smart, tough football player,” Stefanski said. “He will give you everything he has. He is very sound in what he is doing. There are some tough matchups on the edge when you are facing some of these teams. He battled like he always does.”