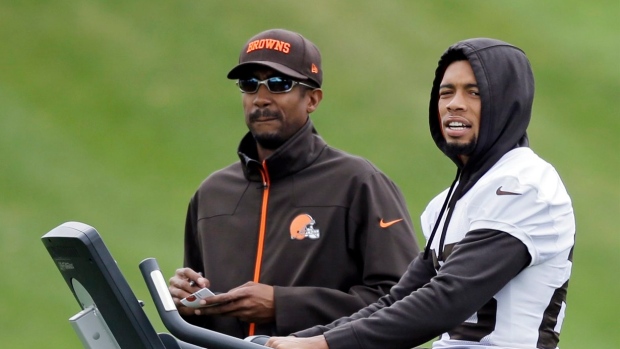 BEREA, Ohio - Browns Pro Bowl cornerback Joe Haden did not practice for the second straight day because of a hip injury.

Following Thursday's practice, the Browns listed Kruger as being out with a back injury. The extent of Kruger's injury is not yet known. He was on the field for Wednesday's workout.

Haden's status for Sunday's game against Pittsburgh won't become clearer until Friday. He got hurt in the second half last week in a win at Tennessee, but didn't miss a play. He rode a stationary bike again Thursday as his teammates worked out during the portion of practice open to reporters.

Haden missed the season finale last year against Pittsburgh with a hip injury.

If Haden can't play, Cleveland's depth in the secondary will be tested. It's possible undrafted free agents K'Waun Williams and Robert Nelson will get extensive playing time.

Kruger's loss would be a blow to the Browns up front. The team will be without defensive end Phil Taylor, who underwent knee surgery earlier this week. Also, tackle Billy Winn has been slowed by a leg injury.

Kruger is having a strong second season with Cleveland, recording two sacks. He only had 4 1/2 sacks a year ago.