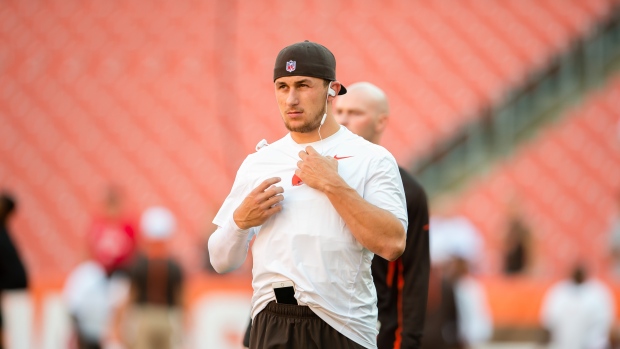 BEREA, Ohio - Johnny Manziel's preseason is over, sacked by a stinging elbow.

Browns coach Mike Pettine said Thursday that Manziel, who has made strides in his second year in the NFL after a rough rookie season, will not play in Cleveland's last two exhibition games because of lingering soreness in his right elbow. The injury has bothered him for two weeks and is more serious than initially thought.

Manziel will miss Saturday's game at Tampa Bay as well as Cleveland's preseason finale at Chicago on Sept. 3. Pettine said the plan had been for Manziel to play against the Buccaneers starters in the second quarter, and for a half against the Bears.

"You can't get those reps back," Pettine said. "He will lose out on all that real-game experience, but we are very pleased at where he is currently."

It's a setback for Manziel, whose improvement on the field this summer and improvement off it has the Browns hopeful the former Heisman Trophy winner can one day solve their problems at quarterback.

For now, though, Manziel is not throwing any passes and Pettine isn't sure when the 22-year-old will resume full participation in practice.

"At some point we'll make the determination," Pettine said. "Let's see how it feels and to me that's a training room, doctor's decision: Does he pick up a ball and start throwing again? And how many times does he do it? And how do we test it to make sure we're not overdoing it and not rushing him back from it?"

Manziel's sore elbow first kept him out of practice on Aug. 11 and the injury flared up Sunday, when he cut his workout short by more than 30 minutes. He hasn't thrown a pass this week, standing to the side as expected starter Josh McCown and backup Thad Lewis took snaps with Cleveland's offence.

Pettine said Manziel is frustrated at not being able to play, but understands it's best that he doesn't make his elbow worse.

"He's upset that he's not out there," Pettine said. "He's upset that it got to this point, but he didn't fight us as far as him saying, 'Forget this, I'm going to go out and do it.' He's smart enough to realize that it's the smart thing to do."

With Manziel sidelined and No. 3 quarterback Connor Shaw recovering from ligament surgery on his right thumb, the Browns needed another quarterback for practice and signed free agent Pat Devlin, who has been with Miami, Minnesota and Chicago but hasn't taken a snap in a regular-season game.

Manziel's elbow problems date back to high school, said Pettine, who was asked if the Browns were aware of his issues before they drafted him in the first round last year.

"I am sure there was something in the medical reports about it, but it had been managed. "

The Browns remain convinced that rest will help Manziel's elbow, but the team also initially downplayed the injury which doesn't seem to be responding as expected.

While Manziel won't play Saturday, the Browns should get their first look in a game situation at wide receiver Terrelle Pryor, the former Oakland QB trying to switch positions at age 26. Pryor came back to practice this week after being out with a hamstring injury and has made it through two practices without any trouble.

He knows his chances of making Cleveland's roster have diminished, and he's excited about getting an opportunity to showcase his talents. Pryor remains confident, but he knows he won't be handed anything.

"I've been cut three times, four times," he said. "I know what it feels like. Would I like to be here? Absolutely. I know I could help this team and make plays for this team, but at the same time I can't control the decisions they make."

Pettine said the Browns aren't looking for Pryor to do anything special.

"Just do his job," he said. "Whatever his job is on that play, do it. Do it to the best of his ability. We know he's a project. We understand that. We're not expecting him to go out there and light it up and catch 10 balls for 150 yards and two touchdowns.

"We understand it's a process. It's just been unfortunate with the injury, the setbacks that we haven't been able to get as good of an evaluation as we wanted."

NOTES: Pettine said all of Cleveland's starters will play the first half Saturday and some could be in during the third quarter. ... Pro Bowl CB Joe Haden is expected to play after missing the first two exhibitions.