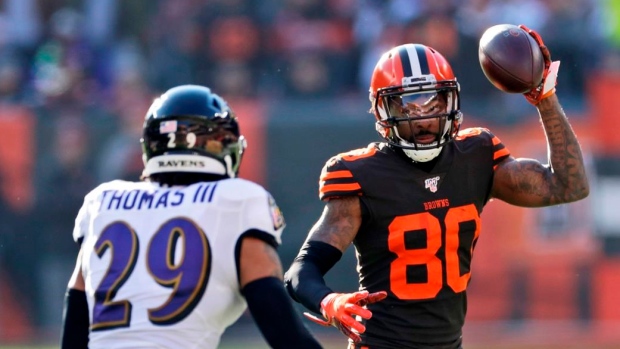 CLEVELAND — Browns wide receiver Jarvis Landry was activated from the physically unable to perform list, clearing the way for him to practice in training camp following off-season hip surgery.

Landry has not missed a game in six NFL seasons. That streak has been in doubt after he underwent an extensive procedure to correct a hip issue that slowed him last season but didn't keep him off the field.

But Landry said months ago that he would be ready in August and the four-time Pro Bowler has kept his word.

One of the league's steadiest receivers, the 27-year-old Landry caught 83 passes for 1,174 yards and six touchdowns. He was one of the few positives in an otherwise disappointing 6-10 season for Cleveland.

In addition, the team claimed cornerback M.J. Stewart off waivers. He played in 10 games last season for Tampa Bay and will give Cleveland some secondary depth.

The Browns are scheduled to begin full practices on Aug. 14. To this point, the team has been limited to virtual meetings and walkthroughs in coach Kevin Stefanski's first camp due to COVID-19 protocols implemented by the league.

Joseph is expected to start at one safety spot this season for the Browns, who signed the 26-year-old as a free agent in April. He spent the past four seasons with Oakland.