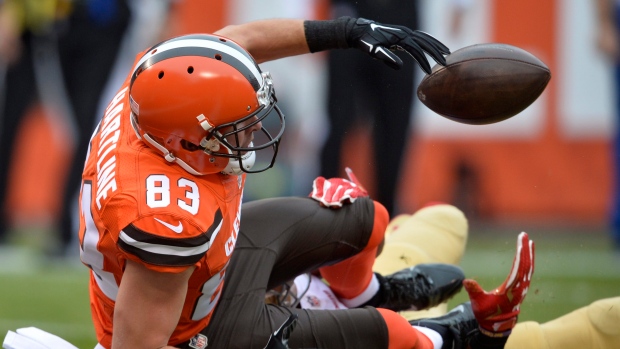 CLEVELAND - Browns wide receiver Brian Hartline has been placed on injured reserve with a broken left collarbone, ending his first season with Cleveland.

Hartline was injured Sunday in a 24-10 win over San Francisco. He made eight catches for 107 yards before he got hurt while being tackled in the second half. The Browns said he had surgery on Tuesday in Cleveland. Hartline, who signed as a free agent in the off-season, finished with 46 catches for 523 yards and two touchdowns.

Hartline's injury further depletes Cleveland's wide receivers. Andrew Hawkins has been sidelined with a concussion and Taylor Gabriel only recently returned from a head injury.

With Hartline out, Terrelle Pryor could get more playing time this week in Seattle. He made his debut Sunday but did not make a catch.

The Browns also signed defensive back Daryl Richardson, who has appeared in 24 NFL games.