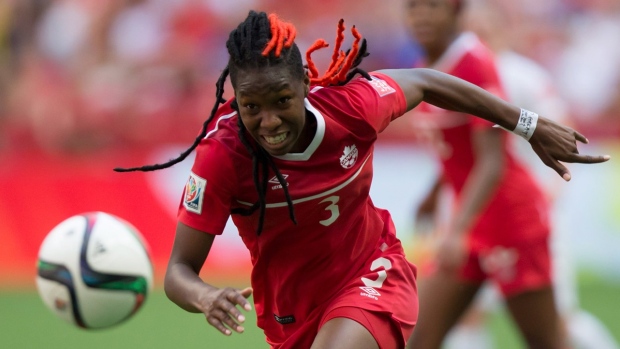 TORONTO - Kadeisha Buchanan had yet to reach double digits in age when Christine Sinclair started her run of 11 straight Canadian female player of the year awards in 2004.

Sinclair, who also won the award in 2000, is still the captain and talisman of the Canadian women's soccer team. But the 32-year-old star forward's stranglehold on the top player award ended Thursday when Buchanan, a 20-year-old defender who put her stamp on the world stage in 2015, was voted BMO Player of the year.

"It's definitely quite a shock because obviously Christine has won it so many times," Buchanan, an unabashed Sinclair fan, told The Canadian Press from Brazil.

Sinclair and coach John Herdman no doubt led the cheering for Buchanan down in Brazil, where the Canadian women are competing at the International Tournament of Natal.

Sinclair, who shuns the spotlight, is the ultimate team player. And Herdman, who dubbed Buchanan "the Sinclair of defenders" back in May 2014, has been transitioning the Canadian squad to one where Sinclair helps float the entire boat rather than steer it.

Her international goal total currently stands at 158, tying American Mia Hamm for second on the all-time women's scoring list. American Abby Wambach, who played her last match Wednesday, is No. 1 with 184.

Buchanan, Canada's best player at the Women's World Cup on home soil this summer, is writing her own history.

She is fearless on the pitch, a tough, athletic and physical defender with good instincts.

The native of Brampton, Ont., was the lone Canadian named to the World Cup all-star team and won the Hyundai Young Player Award, for players born after Jan. 1, 1995.

Buchanan credits playing alongside Sinclair, Diana Matheson, Sophie Schmidt and others for helping raise her game.

Buchanan was also shortlisted for world female player of the year, the lone centre back in the 10-woman list. And the West Virginia University defender is one of three finalists for the MAC Hermann Award as the top NCAA women's player.

She helped the Mountaineers reach the Elite Eight of the College Cup.

"Kadeisha has had an incredible year, shining brightly on the world's biggest stage at the FIFA Women's World Cup Canada 2015 with millions of Canadians watching," Victor Montagliani, president of the Canadian Soccer Association, said in a statement. "Still only 20 years old, she will be a leader for Canada at the international level for years to come."

Buchanan, who already has 43 caps with 39 starts, has hardly stopped this year with the World Cup, Pan American Games and school. She has played for Canada 21 times this year going into Sunday's tournament finale against Brazil.

Forward/fullback Josee Belanger was second in voting for the player of the year award, followed by Sinclair, goalkeeper Erin McLeod and Schmidt. In all, 10 women received votes.

The male player of the year will be announced Friday.