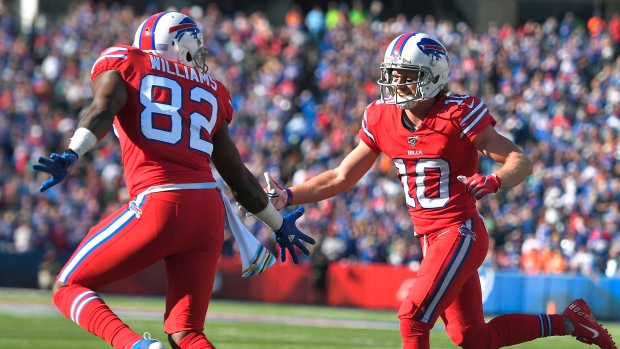 ORCHARD PARK, N.Y. — The Buffalo Bills might be off to their best start in 11 years and sit second in the overall AFC standings, trailing only New England.

What's difficult to judge is how good these 5-1 Bills really are based on their considerably soft opening schedule — four of their first six opponents currently have two or fewer wins. Then there's how inconsistent they were in requiring a fourth-quarter comeback to beat the winless Miami Dolphins 31-21.

It was a game Sunday in which Buffalo's defence allowed a season-high 21 points to an opponent that had been outscored 180-42 over its first five games. And Buffalo's offence gained a season-low 305 yards against a defence allowing a league-worst average 440 yards, and missing its top lineman after Christian Wilkins was ejected on the second play from scrimmage.

It's no wonder coach Sean McDermott spent part of Monday outlining everything the Bills need to work on, from tackling to blocking to catching.

"A lot of things, as you saw in the game, we've got to get cleaned up this week," McDermott said, looking ahead to Buffalo continuing its three-game homestand in facing Philadelphia (3-4) on Sunday.

The concern is the Bills can't continue their inconsistencies and get away with beating better opponents.

That was evident in a 16-10 loss to New England in a game the offence turned the ball over four times and squandered a sterling defensive output in which Buffalo limited the Patriots to what remains a season-low 224 yards offence.

On the bright side, Buffalo has shown resilience in overcoming its mistakes and taking advantage of those made by their opponents.

Four of the Bills' five victories have been decided with the team tied or trailing in the fourth quarter.

Buffalo can chalk up two wins on missed kicks.

The Bills' season-opening 17-16 win over the New York Jets came in a game Kaare Vedvik missed an extra-point and 45-yard field goal attempt. In a 14-7 win at Tennessee in Week 5, Titans kicker Cairo Santos missed all four field-goal attempts including two from inside 40 yards.

Buffalo's inconsistencies have been so consistent, postgame news conferences usually feature a coach or player excusing a lapse.

Quarterback Josh Allen has on several occasions apologized for being careless with the ball.

On Sunday, it was McDermott, who opened by saying: "Obviously, the first half wasn't up to our standard."

There's no telling what that standard might be just yet, and Buffalo's upcoming schedule hardly represents a formidable gauntlet.

With games against Washington (1-6) and the Dolphins over the next month, Buffalo won't face an opponent currently owning a winning record until travelling to Dallas (4-3) on Thanksgiving Day.

A run-by-committee rushing attack which has topped 100 yards in six straight games and ranks seventh in the league in averaging 135.8 yards per game despite ranking 18th with 167 carries.

A slow-starting offence that has scored just 21 points in the first quarter and 10 in the third. Against Miami, Buffalo settled for a pair of field goals on its first two drives, and was blanked in the third quarter for the fourth time this season.

Cornerback Tre'Davious White, whose second-half interception and forced fumble led to Buffalo scoring two touchdowns in overcoming a 5-point deficit. White's 14 second-half takeaways are the most since the first-round draft pick entered the NFL in 2017.

Miami finished with a season-best 109 yards rushing after managing just 291 in its first five games.

Rookie WR Duke Williams is being evaluated with a right shoulder injury. ... CB Kevin Johnson has what McDermott called "a stinger" after initially being treated for a head injury.

9-0: Allen's career record when committing one or fewer turnover in games he starts and finishes.

Host NFC East opponents next two weeks with Eagles on Sunday and Washington the following week.