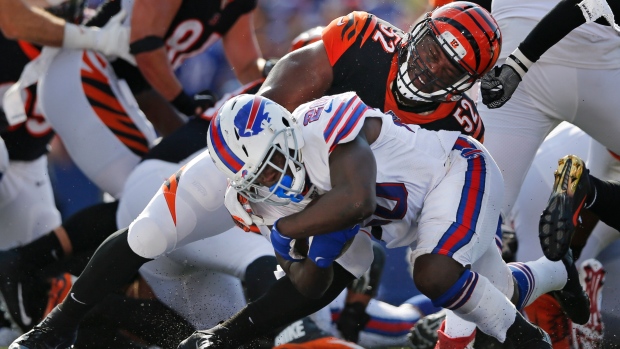 ORCHARD PARK, N.Y. — The mere sight of rookie tight end Dawson Knox bowling over one Bengals defender and shoving off another breathed life into a sputtering and sloppy Buffalo offence.

Knox's fearless and physical catch and rumble up the left sideline for a 49-yard gain to set up Frank Gore's decisive score with 1:50 left in rallying the Bills to a 21-17 home-opening win on Sunday also inspired their defence to rise up for one final challenge.

"Oh, he's a beast, man," safety Micah Hyde said of Knox, who opened the scoring with a 1-yard catch.

"When you're a defence and you see that stuff coming from the offence, I think everyone jumped off the bench and was excited," he added. "The crowd went wild."

It just so happened, Hyde had a hand in sealing the victory in a game the Bills squandered a 14-0 lead.

With Cincinnati facing third-and-5 at Buffalo's 28 and 20 seconds remaining, Hyde tipped Andy Dalton's pass intended for Auden Tate over the middle. The ball was then intercepted by Tre'Davious White, his second of the day.

"We won and that's all that matters," said White, referring to how the Bills were forced to come from behind after allowing the Bengals to score 17 points on three consecutive possessions spanning the third and fourth quarters. "We're blessed."

The Bengals responded a week after being blown out in a 41-17 home-opening loss to San Francisco. And yet, they still managed to come up short in a game their Andy Dalton-led offence combined for 90 yards and three first downs on its first nine possessions, then came alive.

"We dug ourselves a hole there in the first half, which is a killer," first-year coach Zac Taylor said. "We're 0-3. It sucks. It feels terrible. But I'm confident in the guys in this room."

Dalton went 20 of 36 for 249 yards with a 1-yard touchdown run, 1-yard touchdown pass to Joe Mixon and two interceptions. Mixon finally found his legs by finishing with 61 yards rushing, more than doubling the 27 yards he managed in his first two games. He also topped the Bengals' two-game total of 59 yards entering the game.

"We can't have the performance we had in the first half and expect to win," Dalton said.

The Bengals capped their 17-point surge and take the lead on Randy Bullock hitting a 43-yard field goal with 4:54 remaining.

Two plays into Buffalo's next possession, quarterback Josh Allen hit Knox, who was wide open at midfield near the left sideline. Spinning to run upfield, Knox bowled stiff-armed safety Shawn Williams out of the way, and then lowered his shoulder to bowl over Jessie Bates before finally being brought down William Jackson at the Bengals 22.

Knox chalked up the catch and run to instinct.

"As bigger guys, we don't have as many quick juke moves as a lot of guys like Isaiah McKenzie and 'Smoke,'" he said referring to two Bills receivers, including John Brown. "Sometimes you just have to lower the pads and get as many yards as you can."

For Knox, the touchdown was his first since his junior high school season in Tennessee. Though he finished with just 39 catches and 605 yards in three years at Mississippi, the Bills thought enough in his receiving abilities to trade up to draft him 96th overall.

Bengals offensive tackle Bobby Hart was ejected for making contact with an official after White's game-sealing interception. The Bengals were upset because White was never touched down and eventually got up and ran through the back of the end zone.

The officials ruled the play had ended because White had already given himself up.

Allen finished 23 of 36 for 243 yards with a touchdown and interception. He was picked off while back-pedaling on third-and-7 and threw off his back foot. The weak pass was easily intercepted by Darius Phillips, who returned it to Buffalo's 22 and set up the Bengals first touchdown.

Allen was nearly picked off two more times and almost lost a fumble before being ruled he was out of bounds.

Taylor, who took over after Marvin Lewis was fired this off-season, became the fifth of Cincinnati's 10 coaches to open his first season 0-3, and third in a row. The worst start by a first-year Bengals coach was Sam Wyche losing his first five in 1984.

The Bills honoured late superfan Ezra "Pancho Billa" Castro during a pregame ceremony. Castro, a mortician from El Paso, Texas, regularly attended Bills games at home on the road, and died in May after a lengthy battle with cancer. Shortly after being diagnosed with cancer, the Bills honoured Castro's wish by bringing him to Dallas to announce their third-round selection of defensive tackle Harrison Phillips at the 2018 NFL draft.

Phillips paid tribute to Castro by wearing a Bills-themed sombrero, which Castro made famous for wearing at games.

Bills: Starting right guard Jon Feliciano did not return after sustaining a neck injury in the first quarter.

This story has been corrected to reflect Knox's touchdown was his first since his junior high school season in Tennessee.