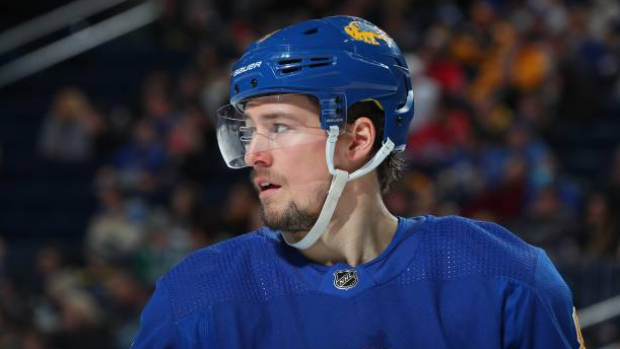 The Buffalo Sabres are expected to be sellers once again at this year's trade deadline and interest appears to be building among contenders for players on their roster.

TSN Hockey Insider Darren Dreger notes that pending unrestricted free agents Robert Hagg, Colin Miller and Cody Eakin could all be on the move ahead of the March 21 deadline.

"The Buffalo Sabres are getting calls, and when you look at expiring contracts in Buffalo you see Robert Hagg’s name. He’s a big, physical, shot blocker, shutdown defenceman, which will appeal to playoff teams," Dreger said on Insider Trading Tuesday. "Then teams are waiting on Colin Miller. We know he’s injured and he’s going to be out until early March, but teams are staying in tune with his health progress. He’s a right-shot defenceman and they’re hard to come by so those are two interesting assets.

"Up front for Buffalo, Cody Eakin might be a depth piece teams take a crack at as well."

Hagg has one goal and six points in 37 games with the Sabres this season, his first with the team. The 27-year-old, who spent the previous five seasons with the Philadelphia Flyers, carries a cap hit of $1.6 million through this season.

Miller has been sidelined since mid-January after undergoing surgery for an undisclosed ailment. The 29-year-old, who has two goals and 12 points in 32 games this season, was given a six-week timeline recovery last month.

A veteran of 381 career NHL games, Miller carries a cap hit of $3.875 million this season.

Eakin, 30, has three goals and 10 points in 43 games this season, his second with the Sabres after joining the team on a two-year, $4.5 million contract. He carries a cap hit of $2.25 million ahead of reach free agency this summer.

Buffalo sits 18 points back of the Boston Bruins for the final playoff spot in the Eastern Conference and are on pace to miss the postseason for an 11th consecutive season.