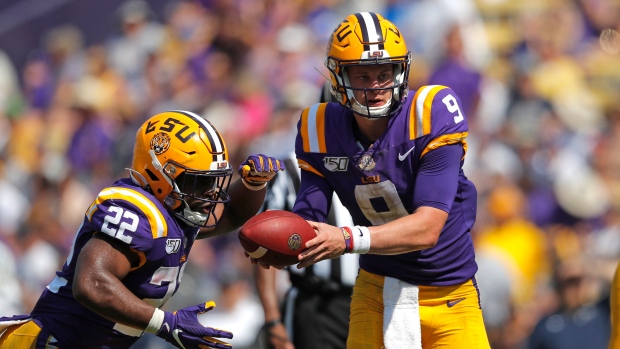 Burrow, who has finished only one fourth quarter this season because of lopsided scores, has completed 78.3 per cent of his passes for 1,864 yards and 22 touchdowns through five games as he remains on pace to threaten most LSU single-season passing records.

Burrow completed 27 of 38 passes for 344 yards and was intercepted once on a tipped pass against Utah State before being replaced by Myles Brennan on LSU's second series of the fourth quarter. Burrow also rushed for 42 yards and touchdown.

LSU's defence largely bottled up an up-tempo Utah State offence that came in averaging 533 yards 38.5 points per game. The Tigers intercepted quarterback Jordan Love three times. Freshman Derek Stingley Jr. displayed veteran-like savvy when he timed a spinning leap to high-point Love's fade pass to the right pylon in front of the intended receivers. Stingley held on for his second interception this season as he crashed down on his back at the LSU 1-yard line, and LSU responded with a 99-yard touchdown drive.

Safety Grant Delpit and Kary Vincent also intercepted Love, who finished 15 of 30 for 130 yards. The Aggies (3-2) totalled 159 yards of offence.

Utah State: Love and the Aggies' offence displayed the talent to execute a few explosive plays against an LSU defence missing several injured starters, including a pair of 35-yard completions to Siaosi Mariner and Jordan Nathan. Stringing enough together to stay in the game was another matter, but Utah State should expect to move the ball better against remaining competition this season.

LSU: The Tigers finished with 601 total yards and look sharp heading into the meat of their Southeastern Conference schedule -- even if 42 points was their lowest in any game this season.

The LSU record for yards passing in a season is 3,347, set by Rohan Davey in 2001. Burrow trails that mark by 1,483 yards with seven regular season games left. The LSU single-season touchdowns passing record is 28, set by Matt Mauck in 2003 and tied by JaMarcus Russell in 2006. Burrow is six short of that mark.

The Tiger Stadium crowd was visibly the thinnest this season. An 11 a.m. local time kickoff meant many of those who attended the game would have little relief from the sun on an unseasonably hot day -- even by south Louisiana standards. Forecasts showed temperatures rising into the low 90s by halftime. Numerous sections of the stadium were mostly empty by the middle of the third quarter after LSU led 28-6.

Fans were also slowed getting to the game because of a freight train that came to a stop on a rail line near the west edge of campus, cutting off expansive parking and tail-gating areas from the stadium less than an hour before kickoff.

The Tigers should hold relatively steady in the AP Top 25 poll after easily covering a nearly four-touchdown spread.

Utah State has a weekend off before hosting Nevada on Oct. 19.