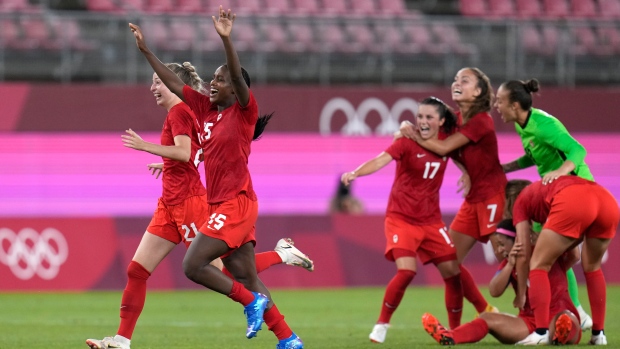 Canada’s women’s soccer team has once again captured the attention of the country at an Olympics, much like they did nine years ago at the London Games when they took home bronze.

The Canadians ended a 20-year winless drought against the Americans with a 1-0 victory in the semifinals of the Tokyo Games on Monday. Now, they’ll go for their first-ever Olympic gold medal on Friday when they face Sweden in the final.

It should be a close battle between two of the top-ranked teams. Canada, ranked eighth in the world, has never beaten fifth-ranked Sweden before at a major tournament, losing three times and earning one draw.

Before Friday’s showdown for gold, let’s take a closer look at some of the key numbers behind the matchup.

Canada has five wins in 23 all-time meetings with Sweden, along with four draws and 14 losses, although 12 of those defeats occurred between 1987-2012.

The Canadians are winless in their past three matches against the Swedes, which includes the 2019 FIFA Women’s World Cup, where Sweden eliminated Canada in the round of 16 with a 1-0 win.

Canada last beat Sweden in a friendly on Apr. 6, 2017, winning 1-0 on a goal from Janine Beckie. While it is officially recorded as a draw, Canada also defeated Sweden on penalties at the 2019 Algarve Cup. Jessie Fleming, who converted from the spot to give Canada the victory over the Americans on Monday, also scored the winning penalty in 2019.

The closest Canada has come to beating Sweden at a major tournament came in the group stage finale at the 2012 Olympics. The Swedes jumped out to an early 2-0 lead after 16 minutes, but the Canadians fought back to earn a 2-2 draw, with now-retired forward Melissa Tancredi recording a brace.

Neither team has ever won a major tournament before. The Canadians earned back-to-back bronze medals at the Olympics in 2012 and 2016, and their best finish at a World Cup came in 2003, when they finished fourth. Canada lost 2-1 to Sweden in the semifinals of that tournament.

Sweden has come close before to capturing a major title. They were runners-up at the 2003 FIFA Women’s World Cup, losing 2-1 to Germany on a golden goal in extra time. In 2016, they fell to the Germans again in the gold-medal match at the Rio Olympics.

The Swedes have also narrowly missed out on winning the Women’s Euro, finishing second on three separate occasions (2001, 1995, and 1987). They did capture the title at the inaugural edition of the tournament in 1984, called the European Competition for Women’s Football, but because less than half of UEFA teams competed, the tournament is not officially recognized.

Sweden is riding a 17-game unbeaten streak, dating back to last year. The Swedes last lost on Mar. 7, 2020, in a 2-1 defeat to Denmark at the Algarve Cup. Since then, they have accumulated 14 wins and three draws.

They’re a perfect 5-0-0 in these Olympics, and they haven’t needed extra time or penalties in any of their wins. They opened the tournament with a shocking 3-0 win over the top-ranked United States, ending the Americans’ 44-game unbeaten run.

Sweden has also defeated Australia and Japan, two other top-10 teams, during the streak.

Canada has kept seven clean sheets in 12 games this year, including both matches in the knockout round of the Olympics. Brazil and the United States had scored a combined 17 goals in the tournament, but the Canadian backline was able to hold both team’s offences at bay.

Canada has also allowed more than one goal just once this year, in a 2-0 loss to Brazil at the SheBelieves Cup in February.

While goalkeeper Stephanie Labbé has been solid, making two saves in penalties against Brazil in the quarter-final, centre-back Vanessa Gilles has been one of the breakout stars of the tournament for Canada.

Gilles first gained attention with a strong performance against the Americans at the SheBelieves Cup in February, and although she has less than 10 caps for her country, she has started both of Canada’s games in the knockout round.

Gilles recorded 19 clearances in the semifinal, six more than the entire American team.

Swedish forward Stina Blackstenius leads the way for her team with four goals and helped set up Fridolina Rolfo’s game-winner against Australia in the semifinals. Blackstenius also netted the lone goal that eliminated Canada in the 2019 World Cup.

The Swedes have only been shut out once in 11 matches this year, in a 0-0 friendly against Australia in June.

Canada is the only team in women’s soccer that will have reached the podium in the past three Olympic Games. Sweden will reach consecutive podiums, but they finished seventh at the 2012 London Games.

Canada also becomes just the third team in women’s soccer to ever reach three straight podiums. The Americans won five consecutive medals (four golds, one silver) from 1996 to 2012, and Germany took home bronze from 2000 to 2008.

Sweden’s captain, 36-year-old Caroline Seger, has 220 caps for her country, the most ever by any European player. Christine Sinclair, 38, is coming off her 303rd appearance for Canada, currently fourth-most all-time.

This is the fourth Olympics for both veterans, and each is vying for her first title at a major tournament. Seger told FIFA.com that a gold medal is “the one ingredient” missing for her during her career.

For Sinclair and Canada, the mantra for the team heading into the tournament was to “change the colour of the medal” after winning back-to-back bronze. They have achieved that, but there’s no doubt Sinclair’s teammates will do everything they can to win gold for their long-time captain.