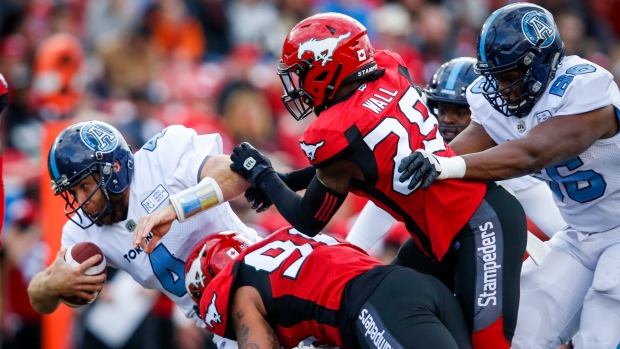 CALGARY — Nick Arbuckle knew that he and Juwan Brescacin had good chemistry in practice.

The pair went out and showed off that connection in game action on Thursday.

Brescacin hauled in a pair of touchdown passes from Arbuckle to lead the Calgary Stampeders to a 26-16 win over the Toronto Argonauts at McMahon Stadium.

"It was amazing," said Arbuckle, who made his third straight start in place of injured quarterback Bo Levi Mitchell and completed 20-of-30 passes for 191 yards. "I've always had a good connection and chemistry with him in practice and getting a lot of reps with him. To be able to get my first start with him on the field and to see him get his first two-touchdown game in his career is cool and it's great to always get him the ball. He's a great receiver and he's great with the ball in his hands after the catch."

Brescacin, who missed the past two games with a concussion, was happy to get back on the field with Arbuckle and the rest of the Stamps.

"He's been bothering me for the past two weeks to be my quarterback," said Brescacin, who caught five passes for 64 yards. "When I came back, we had that connection from pre-season. We also had some plays last year. I'm just happy to come back and help him out, help the team out, be with the receivers again and get the W."

Tre Roberson also ran back a fumble for a touchdown for the Stampeders (3-2), who bounced back from a 30-23 loss to the Hamilton Tiger-Cats five days earlier in Hamilton.

Rene Paredes kicked a field goal and Rob Maver, who was playing in his 150th career CFL game with the Stamps, had a single.

Although Bethel-Thompson completed 32-of-42 passes for 343 yards, he finished the game with four interceptions.

"I threw the ball to the wrong team four times," Bethel-Thompson said. "It's unacceptable as a quarterback. You can't win ball games like that, flat out.

"That's on my shoulders. I've got to play better. I've got to be better for this team and that's a challenge to myself. I'll be better."

The Argos also fumbled the ball twice and had a turnover on downs.

"Holding onto the ball, that's something that's been a problem for us," said Toronto coach Corey Chamblin. "We preach it. At the end of the day, guys have got to do a better job of holding onto that ball. We cannot give the opponent and opportunity to score."

After a slow start for both teams, Crapigna opened the scoring at 9:28 of the first quarter with a 50-yard field goal.

Brandon Smith picked off an errant pass by Bethel-Thompson to give the Stamps great field position late in the opening quarter. Arbuckle then completed three straight passes, including a 20-yard touchdown strike to Brescacin with 55 seconds to play in the first.

The Stamps extended their lead to 11-3 thanks to a 31-yard field goal by Paredes and a 65-yard single by Maver.

Arbuckle then led Calgary on an extended drive before being picked off in the end zone by Toronto's Alden Darby.

Bethel-Thompson took advantage of the timely turnover by engineering a seven-play, 85-yard drive that was capped off by an 11-yard touchdown pass to Edwards with no time left on the clock in the first half.

The Argos missed out on a great opportunity to record a two-point convert after Calgary's Mike Rose was penalized for roughing the passer on Toronto's first try. Given a second chance, Bethel-Thompson wasn't able to find an open receiver in the end zone.

Early in the third quarter, Calgary linebacker Cory Greenwood laid a big hit on Edwards to force the fumble that Roberson picked up and ran back 93 yards into the Toronto end zone.

"Greenwood made a hell of a play," Roberson said. "He forced the fumble and I just happened to be there to pick the ball up. I got great blocks by everyone on the defence and that's just a great result."

Arbuckle then completed a short pass to Reggie Begelton for a two-point convert to extend Calgary's lead to 19-9.

Turnover troubles continued for the Argos in the third quarter as Calgary's Raheem Wilson picked off another errant pass by Bethel-Thompson for his first-career CFL interception.

Undeterred by his earlier miscues, Bethel-Thompson led the Argos on an eight-play, 94-yard drive that culminated with him throwing a 15-yard TD pass to Wilder Jr.

After Micah Awe intercepted a pass by Arbuckle late in the third, the Calgary defence answered right back as Greenwood picked off a wayward throw by Bethel-Thompson.

Greenwood continued his strong defensive performance in the fourth quarter when he recovered another turnover, this time a fumble by Wilder, on Calgary's 24-yard line.

Robertson Daniel intercepted another errant pass by Bethel-Thompson with five seconds left in the game to seal the win for the Stamps.