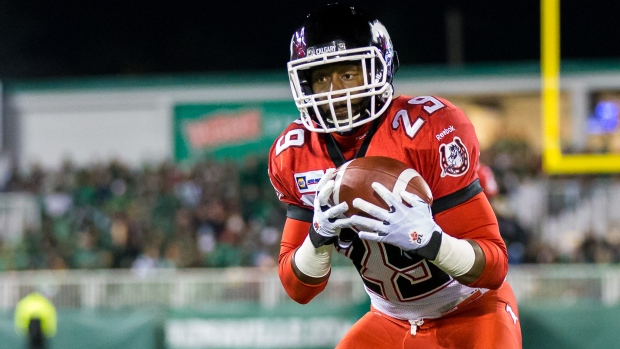 CALGARY — The Calgary Stampeders have re-signed defensive back Jamar Wall.

The eight-year veteran from Lubbock, Texas, has played 128 career regular-season games for the Stampeders, including 16 starts at strong-side linebacker 2019.

Wall served as one of the team captains this past season and was fourth on the team with 67 defensive tackles and added one special-teams tackle, one sack and three knockdowns.

He was scheduled to become a free agent in February.

"Jamar is one of our veteran leaders and has long been an important player and a stabilizing force for our defence," Stampeders president and general manager John Hufnagel said in a statement. "I'm very pleased that he will be back in 2020 and look forward to seeing him maintain his high level of play."

The Texas Tech alum joined the Stampeders in 2012 and was part of Calgary's championship teams in 2014 and 2018. He has played 12 career post-season games for the Stamps.

"I'm happy for the chance to continue my career with the team that brought me to the CFL eight years ago," Wall said. "With Brandon Smith retired, I'm the oldest guy in the secondary now and I'm looking forward to doing everything I can to help the young guys on and off the field and help us continue to be a winning team."

The Toronto Argonauts have signed running back Bishop Sankey to a two-year contract.

A second-round pick of the Tennessee Titans in 2014, Sankey was signed to the Argos' practice roster in late October.

Sankey most recentlly spent time with the AAF's San Diego Fleet this spring, rushing 30 times for 119 yards over four games before the league suspended operations.