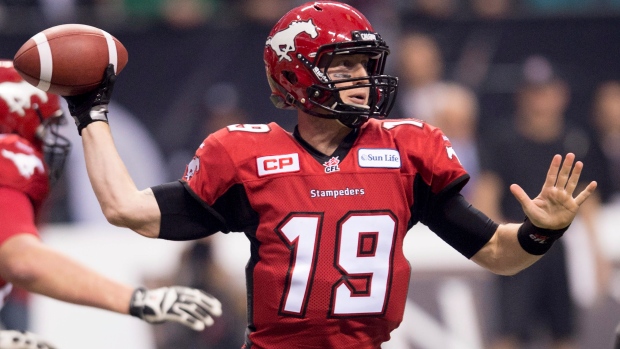 Only once in the past 17 years has a CFL team repeated as champions (the 2010 Montreal Alouettes). For a league as comparatively small as it is, the repeat is still a massive undertaking.

The Calgary Stampeders are, of course, next up to attempt the feat after last year’s Grey Cup win and appear to have as good or better a chance as any team for this year’s Grey Cup.

The team lost major pieces of their offensive line when Stanley Bryant signed with the Winnipeg Blue Bombers and Brett Jones with the New York Giants, but the Stamps offence still features maybe the top two players in the league in Bo Levi Mitchell and Jon Cornish. And at just 25-years-old, there’s still the very real possibility Mitchell is only getting better.

There could be a little more concern on defence however, where the team lost two starters to a middle-ranked unit.

The West should present an even greater challenge this year with a healthy Darian Durant in Saskatchewan, a (hopefully fully) healthy Travis Lulay in BC, and teams only getting better in Edmonton and Winnipeg. And Brandon Banks is still in Hamilton, but Calgary is as good a team to bet on as any heading into the season.

As impressive as Cornish, Jones, and the other Calgary starters were, it’s the homegrown depth assembled by Hufnagel, director of player personnel, John Murphy, and Canadian scout, Brendan Mahoney that makes them the envy of the CFL. Consider that, last season, starting Canucks Cornish, offensive tackle Dan Federkeil, guard Brander Craighead, and defensive tackle Corey Mace all missed time due to injury, in a year where the club had already lost Nationals Dimitri Tsoumpas (retirement), Jon Gott (trade), and J’Michael Deane (expansion draft).

Thanks to RB Matt Walter, OL Spencer Wilson and Shane Bergmann, and DTs Junior Turner and Quinn Smith, among others, the team never missed a beat.

That is what's next for Mitchell: sustaining the level of play we saw last season and continually improving, which is a scary thought in and of itself. Full analysis

The Stamps scored big with their first two selections in the draft. Karl Lavoie was part of a deep O-line class and was expected to fill the vacated roster spot of Brett Jones, but a shoulder injury will keep him out of action for the next three weeks.

Lemar Durant meanwhile, was fortunate there was no "green room" so CFL fans couldn’t see his expression as he fell to the bottom of the second round. The Stamps strongly considered taking the receiver from SFU with their pick at the end of the first round, and couldn't believe he was still available nine spots later.

Durant's talent is undeniable, and he's in the perfect spot, on a team with an elite QB and offensive coordinator, and one that needed to upgrade its Canadian talent in the receiving corps. Durant has improved each week during camp, committed to playing special teams, and has been able to absorb the playbook better than expected.

Once he learns how to take advantage of the waggle, combined with the new rules limiting contact by defensive players, Durant could be a ratio-changer for the Stamps down the road.