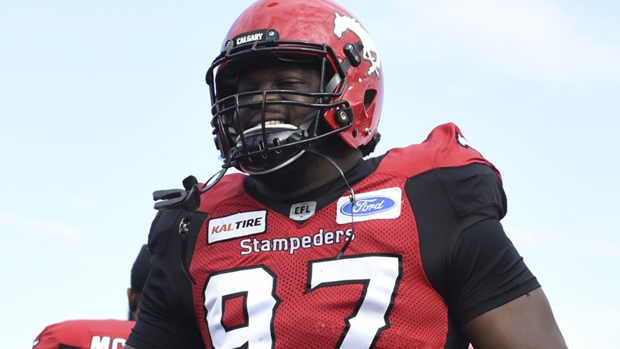 The Calgary Stampeders have signed Canadian defensive tackle Derek Wiggan and American DT Mike Rose to two-year contracts, the team announced on Monday. Both were eligible to become free agents next month.

Oh baby! We just 🔒'd up two MAJOR pieces of the D-Line!

According to TSN's Farhan Lalji, Rose's contract will pay 160K and 170K for the next two seasons and will also incudes incentives for all-star selections.

Couple of @cfl notes:
🏈 Mike Rose deal with the #Stamps is 160k & 170k in hard money the next 2 seasons. Plus all-star incentives.
🏈 #TiCats FB Nikola Kalinic worked out for #Colts today. More #NFL workouts to come for him. @CFLonTSN

“Derek and Mike have been a very effective tandem in the middle of our defensive line and I’m pleased that they have chosen to make this commitment to the Stampeders,” said Stampeders president and general manager John Hufnagel. “Both players continue to get better, with Mike earning well-deserved CFL all-star recognition last season.”

Wiggan and Rose both earned CFL all-star nods in the 2021 seasons.

Wiggan, 29, was the Stamps nominee for the 2021 Most Outstand Player award after playing all 14 regular season games and recoding 32 tackles and two sacks.

“I’m extremely happy to get the deal done – Calgary is the only place I wanted to be,” said Wiggan. “I really appreciate the love that the Stampeders organization and the city has shown me. I’m looking forward to getting back on the field with my teammates and coaches.”