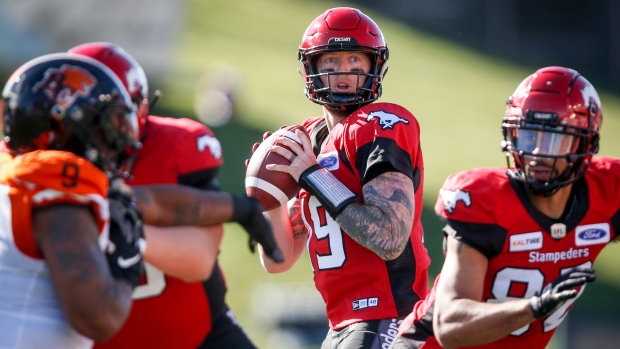 REGINA — Nick Arbuckle isn't afraid to admit that he's a little nervous stepping in to replace Bo Levi Mitchell as the starting quarterback of the Calgary Stampeders.

Arbuckle moved into the starting lineup after the Stampeders placed Mitchell, who hasn't missed a game due to injury since 2014, on the six-game injury list. Mitchell reportedly suffered an injury to his right pectoral muscle late in Calgary's 36-32 victory over the B.C. Lions on June 29.

The Stampeders made the decision after receiving a second opinion on Mitchell's injury on Thursday from renowned Los Angeles physician Dr. Neal ElAttrache, who has treated Kobe Bryant and Tom Brady. With the reigning CFL Most Outstanding Player moving to the injury list, the spotlight falls on Arbuckle, a 25-year-old making his first CFL start.

Arbuckle, who went 9-for-9 passing for 93 yards and one touchdown in the victory over the Lions, feels that some nervousness is a good thing.

"I think that if you don't feel those kind of nerves of excitement and things like that, then you shouldn't be playing anymore," said Arbuckle. "Just knowing that I'm going to be out there taking the first snap, it's not just a special feeling but also exciting. It's the first time I'm made a start I believe in four or five years."

While Mitchell was hoping he would be able to play Saturday, Arbuckle used the week of practice to get ready in case he was called upon to start.

"Mentally, this was similar to weeks before as far as going over the game plan and things like that. From a physical standpoint, I've gotten a lot of the reps this week so I feel more prepared from that standpoint," said Arbuckle.

There has been speculation that Mitchell's stay on the six-game injury list would be a short one, perhaps even being just a single game.

Head coach Dave Dickenson has solid reasoning in not estimating how long a player will be sidelined with an injury.

"Some try different treatments and other avenues to get better and some players just heal faster than others," said Dickenson.

He was, however, comfortable in saying Mitchell won't be removed quickly from the injury list.

"We put him on there thinking that it's probably going to be six games. That's what the doctors gave us," said Dickenson. "(Stampeders president and GM John Hufnagel) is not in the business of putting guys on and taking the off unless they are at least four weeks. I definitely feel like he had an injury there and he wasn't necessarily perfect. Even at the beginning of the year, he was complaining about a little bit of pain. Obviously, he's got some issues in there.

"We're going to have to rally, to find a way to win games without Bo, which really hasn't happened. We won last week but it's different when it's a couple minutes of action."

BANGED UP: In addition to Mitchell, the Stampeders also placed running back Don Jackson and receiver Hergy Mayala on the six-game injury list. Receiver Juwan Brescacin is also expected to miss Saturday's game. Jackson and Brescacin were in concussion protocol this week while Mayala is sidelined with an undisclosed injury.

ALSO BANGED UP: Injuries will also force the Riders into a number of roster moves. Wide receiver K.D. Cannon will miss the game due to a groin injury while linebacker Sam Hurl will be sidelined with an undisclosed injury. Justin McInnis will move from backup slotback to starting wide receiver, replacing Cannon, with receiver Brayden Lenius also being added to the roster.

SOLOMON RIDES AGAIN: Linebacker Solomon Elimimian, who has been battling with a calf injury, will make his Riders debut after signing as a free agent in the off-season.