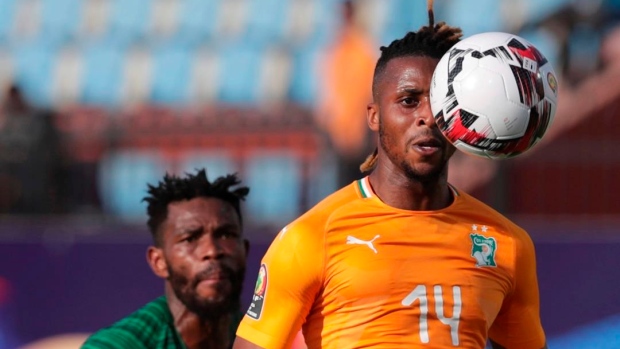 Cameroon had to work hard on Tuesday to open its title defence with a 2-0 win at the African Cup of Nations in Egypt and Ghana was the latest team to be upstaged by an underdog.

Cameroon found it difficult to break down Guinea-Bissau until defender Yaya Banana was left unmarked from a corner to head in the opening goal in the 66th minute. Cameroon's second came straight after when substitute striker Stephane Bahoken got a lucky break to score with his first touch three minutes later.

The win, which put Cameroon on top of Group F, left coach Clarence Seedorf and his players relieved that something had finally gone right for the country at the tournament.

Cameroon was meant to defend its title on home soil at this tournament but was dumped as the host nation because of poor preparations and the African Cup was handed to Egypt just six months before kickoff.

That also raised complications for the Cameroon team, which lost its automatic place as host and was thrown into a nervous battle to qualify. It did and managed to also overcome a tricky opening encounter against Guinea-Bissau in Ismailia in the tournament opener.

"There was a lot of tension," said Seedorf, the former Dutch international. "It is always difficult, the first match."

Ghana fought back from 1-0 down after less than two minutes to lead 2-1 against Benin in the group's second game. Ghana's goals came through the Ayew brothers Andre and Jordan. But Ghana defender John Boye was given a second yellow card for time wasting and sent off and Benin equalized for a 2-2 draw.

Forward Mickael Pote scored both goals for Benin and Ghana was left fuming at what it felt was an injustice over Boye's red card.

He was lining up to take a free kick deep in Ghana's half when goalkeeper Richard Ofori decided to take it instead. Boye left the free kick for the goalkeeper, who was some way from the ball at the time and jogging slowly toward it. Tunisian referee Youssef Essrayri decided it was time wasting and punished Boye, provoking an angry response from the Ghana bench, where players jumped up and down and shouted.

Cameroon had a big slice of luck against Guinea-Bissau.

Banana's header for the opener was strong but Guinea-Bissau defender Rudi Silva had a chance to clear it off the goal line and only kicked the ball into the roof of his own net.

Silva blundered for the second Cameroon goal when he headed a tame cross straight into a teammate and the ball rebounded for Bahoken, who had just come on, to score.

Cameroon's difficult buildup to the African Cup didn't stop once the squad arrived in Egypt.

The team announced on Monday that striker Joel Tagueu was leaving the tournament after a medical revealed a dangerous heart condition.

Ghana trailed 90 seconds after kickoff against Benin when Poke raced onto a through ball, dodged between two defenders, and slipped the ball under onrushing goalkeeper Ofori.

Andre Ayew, the new Ghana captain, responded with a goal of high quality seven minutes later. Covered by two defenders on the right side of the penalty area, Ayew created an opening and fired a low left-foot shot inside the near post.

Brother Jordan put Ghana ahead with a powerful shot into the roof of the net three minutes before halftime.

Boye's red card unsettled Ghana and Pote equalized eight minutes later. Ghana must also do without central defender Boye in its next group game against Cameroon.

Ghana isn't the first team to be caught off guard by one of the lesser-ranked teams at this African Cup, which has been increased from 16 to 24 teams thus allowing more space for the outsiders.

Uganda beat former champion Congo on the opening day, Burundi made it tough for Nigeria and Madagascar, on its tournament debut, drew with Naby Keita's Guinea.

The Cameroon-Ghana group was the last to get into action. Every team at the tournament has now played one game, including Ivory Coast's 1-0 win Monday over South Africa.