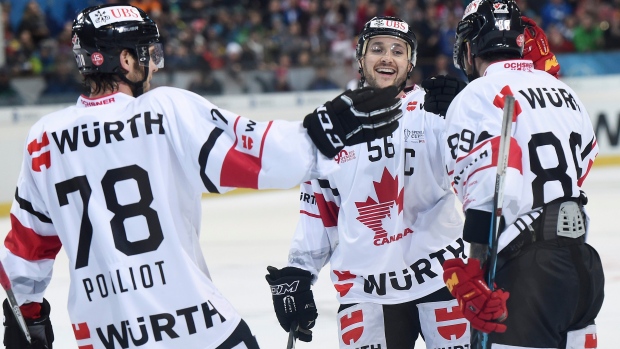 DAVOS, Switzerland — Canada coach Luke Richardson had his players concentrate on special teams in their lone practice before the 2016 Spengler Cup, and that focus has paid off with a spot in the tournament final.

Chay Genoway scored the winning goal and Marc-Antoine Pouliot had a goal and an assist as Canada avenged a 7-4 defeat to Minsk in its tournament opener.

While Canada failed to score multiple power-play goals in a game for the first time in Davos, the Canadians generated eight chances with the man advantage which allowed them to control the game.

"Our power play has been really hot through the whole tournament so we wanted to make sure that we had puck possession so that we're drawing penalties instead of taking them. I think for the most part of the game we did that," Richardson said.

"We got in a little trouble in the end and they scored 5-on-3 to make it close, but I think for the most part our discipline was really good."

Canada will try for its 14th Spengler Cup title when it plays HC Lugano on Saturday's final. Only Davos, the tournament host with 15 titles to its name, has had more success than Canada.

Canada is often at a readiness disadvantage at the annual tournament, putting together a team on short notice that has to play against well-established clubs from Europe.

Richardson said Canada's players have responded to the challenge by showing a capacity to adapt and improve as the tournament progresses.

"You come together as a team in a very short time, and I think every game we see the team getting better," Richardson said. "That's just a compliment to these players doing it in a fast period of time."

"They're all really intelligent, skilled players," he added. "We spent some time with them, showed them some videos and gave them a plan, but let them talk amongst themselves. And you know what? It's been unbelievable to watch them play and jell together."

Zach Fucale made 21 saves to earn his third straight win in goal for Canada, while former NHL goalie Ben Scrivens made 34 stops the loss for Minsk.

Fucale, who plays for the ECHL's Brampton Beast, took over Canada's starting job from Drew MacIntyre after the opening loss to Minsk, and Richardson has been impressed with the 21-year-old Montreal Canadiens prospect.

"He doesn't have a lot of pro NHL and AHL experience, but he does have a lot of international experience," Richardson said of Fucale, who won gold with Canada at the 2015 world junior hockey championship and the 2012 Ivan Hlinka under-18 tournament. "The guy finds a way to win. He's been battling, he's a young guy and everybody likes him and is pulling for him. This is a big step in the right direction for this guy's career."