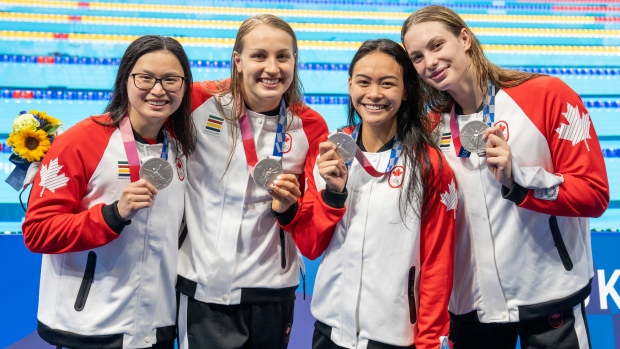 By the time the Olympic and Paralympic flames were extinguished in Tokyo in early September, Canada had won a total of 45 medals.

Our Olympic athletes won seven gold, six silver and 11 bronze. The 24 medals won at the pandemic-delayed 2020 Summer Games is Canada’s highest medal tally at a non-boycotted Olympic Games, and the seven gold medals were the most won by Canada at a Summer Games since the 1992 Barcelona Games.

Canadian women, or athletes competing on a women’s team, won an impressive 29 medals in Tokyo, including our county’s first 14 medals of the Games.

That kind of performance deserves a revisit before we turn to 2022 and focus on the Winter Games in Beijing. 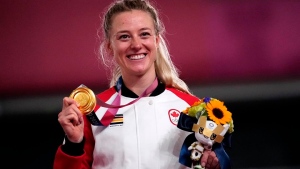 Kelsey Mitchell didn’t even own a bike four years ago, but in Tokyo she sprinted to an Olympic gold medal on one in track cycling.

The former collegiate soccer player had always dreamt of becoming an Olympic athlete. Cycling came into the picture through the RBC Training Ground program, which scouts talented athletes for Olympic potential. 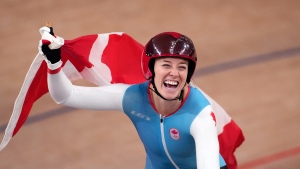 Mitchell’s gold was the final medal of the Games for Canada. The then 27-year-old beat Ukraine's Olena Starikova in two straight heats to capture the women's sprint title. 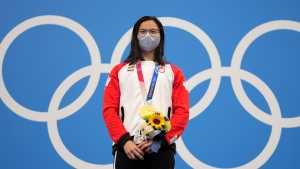 If you don’t follow competitive swimming, you may not have heard of Maggie Mac Neil before the 2020 Olympics, but she had a hot run leading up to the Games.

Mac Neil was coming off setting an NCAA and U.S. Open record in the 100-metre butterfly swimming for the University of Michigan. She followed that up by winning gold in the women’s 100m butterfly at the FINA World Championships, while competing on her first Canadian senior national team.

So, it was no surprise to see Mac Neil rack up the hardware in Tokyo, taking home three medals – one of each colour. 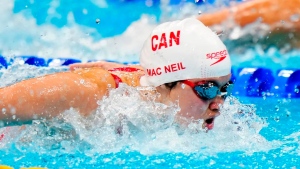 The Olympic medallist started the Games by helping Canada swim to a silver in the 4x100m freestyle relay with Kayla Sanchez, Rebecca Smith and Penny Oleksiak. She then bested her own national record to win gold in the 100m butterfly, and then capped things off with a bronze in the 4x100m medley relay with Kylie Masse, Sydney Pickrem and Oleksiak.

21-year-old Mac Neil isn’t going anywhere anytime soon, she recently set a world record in the 50m backstroke at the short-course worlds in Dec. 2021, and with her teammates on the National team there are likely more medals in her future. 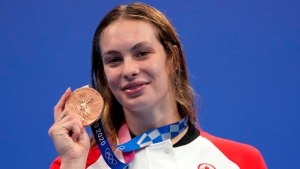 Penny Oleksiak, a.k.a. Canada’s most decorated Olympian, had another incredible Games performance in Tokyo.

After storming onto the scene as a 16-year-old in the Rio Olympics in 2016, Oleksiak showed up in Tokyo with the same passion and talent, leaving the Games with seven career Olympic medals. 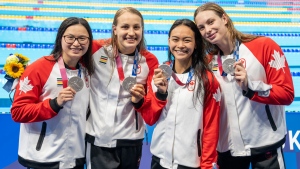 Oleksiak, along with Mac Neil, Sanchez and Smith kicked things off in the pool with a silver in the 4x100m freestyle relay.

The University of Toronto student then swam to a bronze in the 200m freestyle, before wrapping things up with a bronze in the 4x100m medley relay alongside Masse, Pickrem and Mac Neil.

It’s safe to say Canadian fans are looking forward to what comes next for Oleksiak. Could it be Paris in 2024? 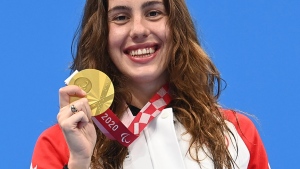 We couldn’t wrap up our time at the pool without talking about Rivard. The 25-year-old was on fire in Tokyo, winning five medals to give her a career total of 10 Paralympic medals over three Games.

Rivard shines in the S10 freestyle where she won bronze in the 50-metre event and then gold in both the 100m and the 400m. Then she swam to a silver in the 100m S10 backstroke. Finally, she was part of the team that won a bronze in the 4x100m freestyle relay with teammates Morgan Bird, Katarina Roxon and Sabrina Duchesne. 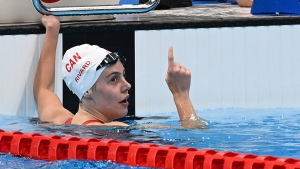 The Saint-Jean-sur-Richelieu, Que., native is taking a minute away from the pool before deciding if a fourth Paralympic Games are in her future. 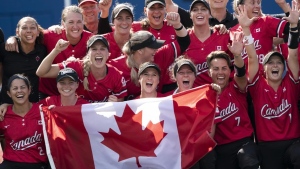 The sport of softball has had an uncertain history at the Olympics – some years it’s an official event, other years it isn’t. Softball debuted at the Summer Games in 1996 in Atlanta but hadn’t been included in the Olympic program since 2008, until the sport made its return at the 2020 Olympics.

The Canadian squad has qualified for all five Olympic tournaments but 2020 was the country’s first medal win. 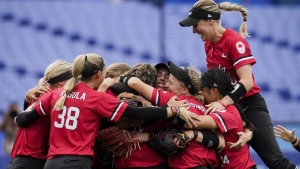 Canada defeated Mexico 3-2 to win bronze, which was a long time in the making for players like Danielle Lawrie and Jenn Salling, who played for Canada in 2008 but won’t have a chance to compete in 2024 as the sport isn’t included in the Paris Games.

Then there’s the story of Sara Groenewegen. In 2018 the pitcher was preparing to play with Team Canada in an Olympic qualifying tournament when she became ill. Doctors weren’t sure what was wrong, and she ended up spending 10 days in a medically induced coma. Eventually, she was diagnosed with legionnaires' disease, a severe form of pneumonia. 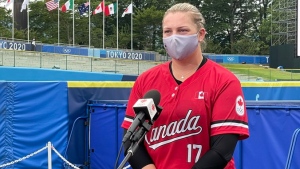 Three years after being given a three-per-cent chance to survive, the 26-year-old Groenewegen was pitching for Canada at the Olympics. 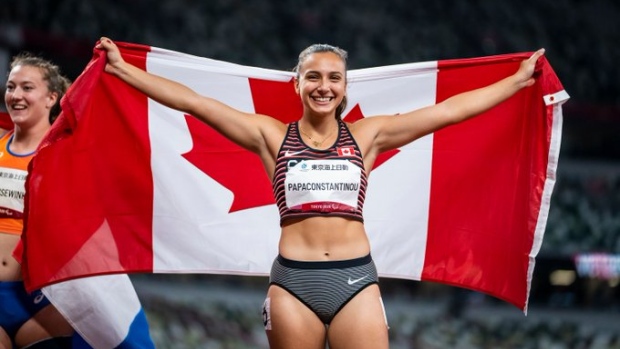 Papaconstantinou took part in her second Paralympic Games in Tokyo, after previously competing as a 16-year-old at the Rio Games.

The Torontonian earned Canada’s 20th medal at the 2020 Paralympic Games when she ran a personal best to win bronze in a photo-finish 100-metre race. 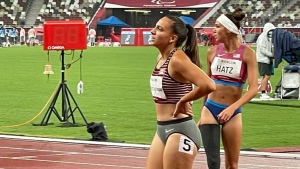 Papaconstantinou not only set a PB with her bronze finish, but also bested her own national record twice in the same day in the T64 200m. 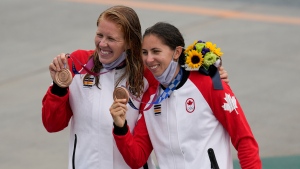 This was the first time that women were included in the canoe sprint events at the Olympics, and Canadians landed on the podium multiple times.

Laurence Vincent Lapointe almost had her Olympic dreams stolen when a former boyfriend was responsible for her failing a doping test in 2019, missing the world championships and almost the 2020 Olympics. 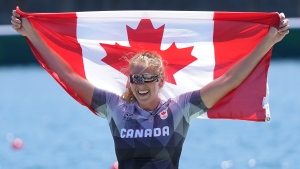 It was a torturous path back to the Games as the International Canoe Federation ruled in January 2020 that Vincent Lapointe was found to be telling the truth and she was reinstated and allowed to compete in Tokyo. 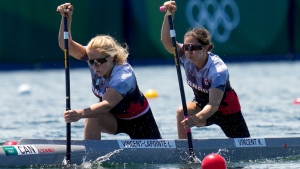 In the sport’s debut, the 29-year-old Vincent Lapointe paddled to two medals – a silver in the solo 200-metre sprint and then teamed up with Katie Vincent to win bronze in the C-2 500m. 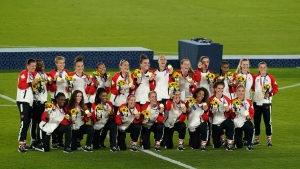 We couldn’t put a list like this together without mentioning the golden Canadian women’s soccer team moment we were all treated to during the 2020 Games.

After back-to-back bronze-medal Olympic finishes in Rio and London, Canada was in Tokyo for one colour, and that was gold. 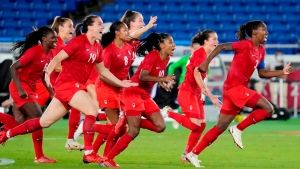 In what might be one of the most-watched moments of the Tokyo Games, Canada defeated Sweden 3-2 on penalty kicks to win the gold medal.