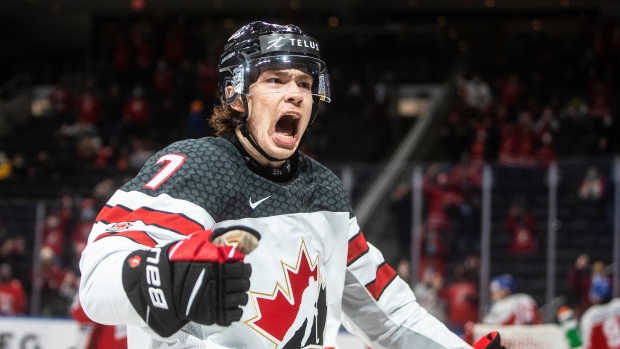 Team Canada continues its pursuit of gold at the World Junior Hockey Championship on Tuesday with their second preliminary round game against Austria.

The Canadians opened the tournament on Boxing Day with an impressive 6-3 win over Czechia.

On Tuesday, it will be London Knights goalie Brett Brochu getting the nod in his first start for the national team.

"I'm really excited," the London Knights goalie said. "Ever since I was a kid, I've dreamt of that moment."

Unlike his Team Canada goalie teammates in Dylan Garand of the New York Rangers and Sebastian Cossa of the Detroit Red Wings, the 19-year-old Brochu has yet to be drafted into the NHL after two years of eligibility.

"Having a great OHL career, it's hard to believe he hasn't been drafted," said Team Canada teammate Cole Perfetti, who played in the OHL as a member of the Saginaw Spirit before being selected 10th overall by the Winnipeg Jets in 2020. "With his work ethic and the kind of guy he is, teams will want that kind of person."

Brochu is ready for the spotlight on Tuesday.

Owen Power netted a hat trick against Czechia in his first career game at the World Juniors, marking the first time a blueliner scored three times for Canada in the best-on-best tournament.

"It's his ability to play the high-performance game with a calmness, I'm not sure you can teach that," Cameron said of Power, who was selected first overall by the Buffalo Sabres in the 2021 NHL Draft. "He's able to keep that even keel. He's done it at the Worlds. He's done it at Michigan. He's started here at the World Juniors, and we expect him to continue."

Forward Xavier Bourgault might miss Tuesday's game after taking a hit to the head against Czechia on Sunday.

"No official update other than he wasn't able to practise today," Cameron on Monday.

If Bourgault can't go, 14th forward Logan Stankoven might get slotted into the lineup.

Team Canada will also be without forward Justin Sourdif, who was handed a one-game suspension for an illegal check to the head/neck.

Austria was thumped 7-1 by Finland in their opening game of the World Juniors on Monday.