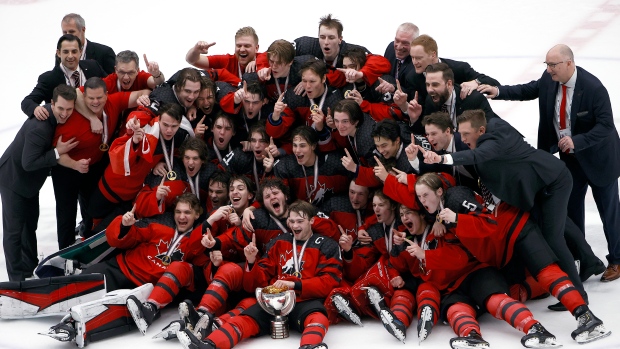 FRISCO, Texas — Canada is golden at the under-18 men's hockey championship after another strong performance from two of the youngest players at the tournament.

Led by 17-year-old captain Shane Wright and 15-year-old Connor Bedard, the Canadians beat Russia 5-3 on Thursday in the championship game, going undefeated along the way.

Wright had two goals and an assist while Bedard added a goal and a helper.

Brennan Othmann scored a highlight-reel between-the-legs goal for Canada, which got another from Logan Stankoven.

Benjamin Gaudreau made 31 saves and was named top goaltender at the 10-nation event.

Twenty-one of Canada's 24 players were born in 2003, with only Wright and Denton Mateychuk born in '04. Bedard is an '05 birthday and doesn't turn 16 until the summer.

The Canadians have now won the tournament four times, with their last gold medal coming back in 2013 when led by current Edmonton Oilers captain Connor McDavid, who was also playing as a 15-year-old.

Michkov paced Russia with a goal and two helpers to finish with 12 goals and 16 points in seven games.

Dmitri Buchelnikov and Vladimir Grudinin rounded out the Russian offence, while Sergei Ivanov stopped 29-of-33 shots.

Canada scored 51 goals while only giving up 12 in its seven games and dominated right from puck drop, beating the defending gold medallists from Sweden 12-1 in its tournament opener, and again 8-1 in the semifinals.

This report by The Canadian Press was first published May 6, 2021.