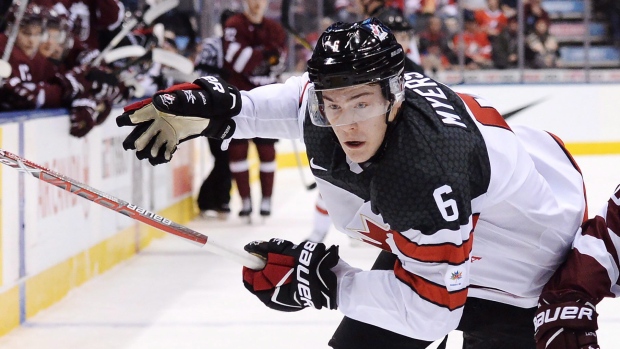 TORONTO — Canada will be without one of its top defencemen for Monday's quarter-final at the 2017 world junior hockey championship.

Philippe Myers, a Philadelphia Flyers prospect, sustained a concussion on a hit from American captain Luke Kunin during the second period of Canada's 3-1 loss to the United States on Saturday night.

"He's concussed. His chances to play in the next game are zero," said Canadian coach Dominique Ducharme. "Might be he's doubtful for the rest of the tournament. Might be coming back late in the tournament."

Myers was the recipient of a Kunin hit behind the Canadian net 4:07 into the second period. The 19-year-old was slow to get to his feet, and required assistance getting to the Canada's bench before leaving the game.

Kunin was assessed a five-minute major penalty for interference and a game misconduct on the play. Myers logged 11 shifts and just over nine minutes of ice time prior to the hit.

"I was surprised I got the game. But we've just got to move on from it," said Kunin. "I just thought it was a hockey play. No intention to hurt him. Hope he's OK. Both teams are playing hard out there trying to win a hockey game."

"When I saw the replay, I thought the guy's feet were probably a foot off the ground," said Chabot of the hit. "Everyone knows Phil is probably (six foot eight) on skates, to get hit to the head I mean you have to jump or do something."

Myers, an undrafted free agent signing of the Flyers in September 2015, has three assists in four games.

"Obviously it's harder for me to see my D partner go down."

Canada is already down to 12 forwards as Mitchell Stephens missed his second game due to an ankle injury suffered against Slovakia on Tuesday.