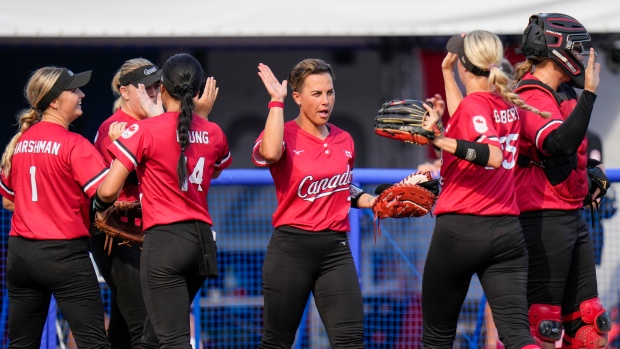 One led the offensive charge in the sport's return to the biggest stage Wednesday, while a teammate making her debut under the brightest of spotlights continued to write an incredible comeback story at the pandemic-delayed Tokyo Games.

Salling, who went 2-for-2 with a solo homer and two walks, is one of four players remaining from the 2008 team that finished fourth after a crushing defeat to Australia at the Beijing Olympics.

The 34-year-old from Port Coquitlam, B.C., Kaleigh Rafter, Danielle Lawrie and Lauren Regula are looking to right that crushing wrong in the twilight of their careers.

Groenewegen, meanwhile, was dominant in registering three strikeouts against just one walk in her Olympic curtain-raiser three years after spending roughly 10 days in a medically induced coma with Legionnaires' disease, a severe form of pneumonia.

Given a survival chance of roughly three per cent at the time of her hospitalization, the 26-year-old from Surrey, B.C., was nearly perfect in her first action at the Games.

Rafter and Kelsey Harshman each drove in Victoria Hayward for Canada, which entered the six-team event ranked third in the world.

Softball kicked off the Tokyo Games, which don't officially get going until Friday's opening ceremony, earlier in the day when second-seed Japan thumped No. 8 Australia 8-1.

The top-ranked United States then downed No. 9 Italy 2-0.

Canada, which failed to win a softball medal in four previous tries between 1996 and 2008 before the sport was dropped for the last two Games, now turns its attention to the Americans for Thursday's marquee matchup.

Exactly 25 years to the day after softball made its Olympic debut in Atlanta, Canada opened the scoring in the bottom of the first inning on RBI singles by Rafter and Salling, but Mexico got out of a bases-loaded jam to avoid more damage.

Salling then pushed the lead to 3-0 with a solo homer to right field in the third for the Canadians, who took bronze at the Women's Softball World Cup in 2014, 2016 and 2018.

Larissa Franklin singled in the fourth to plate Hayward and make it 4-0 before Escobedo got out of another bases-loaded situation.

Jenna Caira allowed Mexico's first hit after coming on in relief in the fifth, and Lawrie pitched the final two innings for the Canadians.

The top-4 teams in the round-robin tournament will have a shot at medals, with the No. 1 and 2 seeds playing for gold, while the third- and fourth-place nations will battle for bronze.

Fans have been barred from almost every event at these Olympics because of COVID-19, which caused the Games to be delayed by one year.

The first two days of softball are being played at the Fukushima Azuma Baseball Stadium, located about 240 kilometres from the main Olympic venues in Tokyo, and some 65 kilometres from the site of the 2011 earthquake and tsunami that killed more than 18,000 people and caused a devastating meltdown at a nuclear power plant.

The rest of the softball schedule is set for Yokohama, just outside Tokyo.

Japan upset the U.S. in the 2008 gold-medal game before softball and baseball were dropped from the Olympic docket in 2012 and 2016, and then brought back for Tokyo.

Both sports have already been nixed from the 2024 Paris Games, but are likely to be restored for 2028 in Los Angeles.

This report by The Canadian Press was first published July 21, 2021.