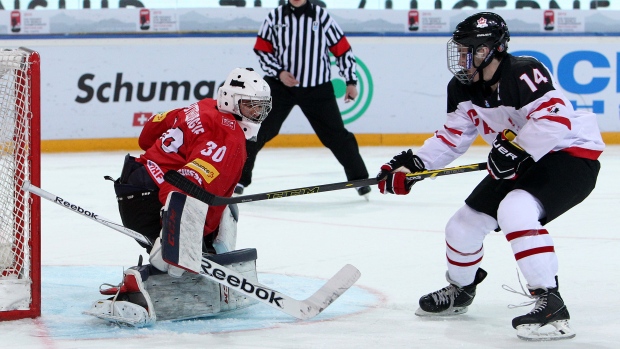 ZUG, Switzerland -- Mathew Barzal scored twice as Canada improved to 2-0 at the world under-18 men's hockey championship with a 4-1 win over Switzerland on Saturday.

Canada finished 3-of-8 with the man advantage and also killed off nine of Switzerland's 10 power-play chances.

"That's way too many special teams for my liking but it gives you a chance to work on them," said Canadian team head coach Tim Hunter. "We'll take it.

"The main thing is we got better today and that's what we're trying to do."

Canada opened the tournament with an 11-6 win over Latvia on Thursday. Hunter said while his team can still play much better, he's pleased the squad has emerged with victories from its first two contests.

"In tournaments like this it's about getting better every day and building your game very day," said Hunter, the head coach of the WHL's Moose Jaw Warriors. "There were elements of our game that were better tonight that weren't so good in our first game against Latvia."

Dominik Diem had a power-play goal of his own for Switzerland while Joren van Pottelberghe made 25 saves.

Canada is tied with Finland for first place in Group B with six points each. The Canadians will face the Czech Republic (1-1) on Sunday.

"The Czechs are going to be better," said Hunter. "They're always a pretty formidable opponent and will be better than the Swiss.

"Hopefully our game gets better and that allows us to play better against them. But our group has been great at listening and learning and coming together so it shouldn't be a problem at all."