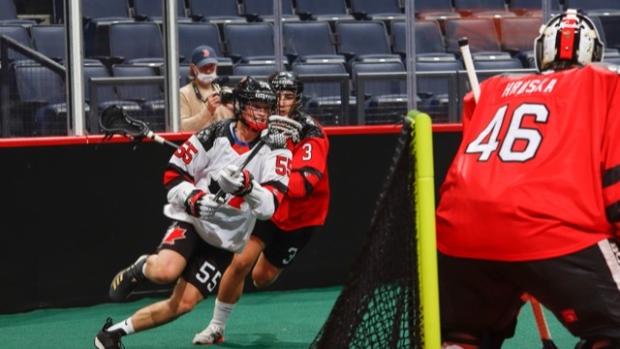 In Game 2 of the 2021 IIJL World Junior Lacrosse Championship, Canada West did much of what they were hoping to do differently after a 15-9 Game 1 loss.

In the end, they just couldn't overcome an early lapse that allowed Canada East to race to a 3-0 lead in the game's first two-and-a-half minutes en route to a 10-9 win.

Canada East now leads the three-game total goal series +7 with Game 3 scheduled for 9pm ET/6pm PT at the Canada Life Centre in Winnipeg. The game can be seen on the TSN app, streaming on TSN Direct and on TSN.ca.

Canada West was hoping to contain Tanner Buck (Orangeville, ON), who was Canada East's Player of the Game in Game 1 after scoring five goals and three assists, and to have a stronger second half after being tied 6-6 at the half of the first contest, only to be outscored 9-3 in the final 30 minutes.

Mission accomplished, to a degree. Canada West held Buck to two goals and no assists in Game 2. They also outscored Canada West 5-3 in the second half, including 3-0 in the fourth quarter.

Ultimately, Canada East pulling out a second straight win came down largely to the early lead they were able to forge.

Defender Jordan Ackie (Cambridge, ON) got the ball rolling with a transition goal 29 seconds into the game in which he nabbed a loose ball in his defensive zone and was quickly behind the entire Canada West offence for a breakaway and was well clear of any opponent before he even hit the centre floor stripe.

Buck and Eddie Qu (Mississauga, ON) followed with goals on breakdowns by Canada West in their defensive zone. That all happened in the first 2:20 of playing time.

Laine Hruska (Warman, SK) getting the start in the Canada West net, settled down after that and wound up making 58 saves on 68 shots for an impressive .853 save percentage.

Hruska got plenty of support from a strong team defensive effort, limiting the opportunities that Canada East's five-on-five offence was able to generate.

Canada East responded by finding different ways to score. They got four transition goals and added one shorthanded marker. Qu led the East with a hat trick, Buck had two goals and five other players chipped in with singles.

The left side of Canada West's offence led the way with a steadily improving performance, they scored just two goals and three assists among the four of them in Game 1 Thursday.

All of Onagi's goals came in the second half. The last two followed a goal by Nolan Oakey (Calgary, AB), making it the first time in the series that Canada West had scored three consecutive goals. That pulled the West to within 10-9 and they had 7:26 remaining to try to find the equalizer that never materialized.

Canada West will need to win Game 3 by eight goals to win the series and earn the World Junior Lacrosse Championship gold medals. If they win by seven, the teams will proceed to an overtime period with the first goal deciding the championship.